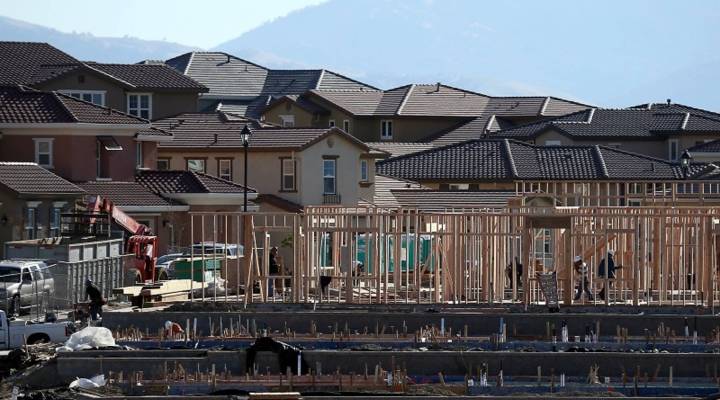 New home sales fell in April but were up 0.5 percent compared to the same period a year ago. Photo by Justin Sullivan/Getty Images

New home sales fell in April but were up 0.5 percent compared to the same period a year ago. Photo by Justin Sullivan/Getty Images

About 569,000 new single-family homes were sold in April, the Commerce Department announced this morning, about 50,000 homes short of what Wall Street expected. The disappointing April number was accompanied with upward revisions for March, when an estimated 642,000 homes were sold. That’s the highest since October 2007.

Despite the stumble in April, the new-homes sales trend still looks up. Compared to March, April’s figures were down 11.4 percent. However, compared to the same period a year ago, they were 0.5 percent higher.

One of the reasons that these numbers are not higher is that there are not that many new homes for sale, according to Danielle Hale, economist at the National Association of Realtors.

“We’ve been talking about low inventory for the last couple of years, and in that time instead of getting better, the inventory has gone in the opposite direction,” she told Marketplace last month.

According to Hale, homebuilders would need double the current level of construction to meet existing demand. Yet builders say they need more developed land and skilled labor, such as electricians and plumbers.

The number of homes available for sale at the end of April was 268,000.

A limited supply of newly constructed homes paired with high demand could lead to increased prices. In April, the average sales price for a single-family home was $368,300. However, many aspiring homeowners are already having a hard time coming up with the funds required to buy a home.

Tim Gurner, a millionaire and a real estate developer in Australia, speculated earlier this month that the reason why young people were not able to afford homes was because they spent their money on avocado toast and expensive coffee.

“When I was trying to buy my first home, I wasn’t buying smashed avocado for $19 and four coffees at $4 each. We’re at a point now where the expectations of younger people are very, very high,” he said. “We are coming into a new reality where a lot of people won’t own a house in their lifetime. That is just the reality.”

Could the reality be that homes are just too expensive? A recent study from real estate website Trulia found that teachers and first responders, such as firemen and police officers, are slowly being priced out of the cities where they work. Even doctors are getting priced out of San Francisco, where the median list price was $1,249,000.

“I am not sure how in touch an Australian millionaire will be with the habits of the U.S. millennials,” David Kelly, chief global strategist at J.P. Morgan Asset Management, told Marketplace. According to him, it’s not that millennials don’t want to own a home, it’s that they can’t afford one. And, no, not because of avocado toast. “The banks are reluctant to lend money to younger people. They’ve got more college debt. They don’t have great jobs in terms of earning potential.”

Middle-income and poor millennials can’t afford to live the American dream, he said.