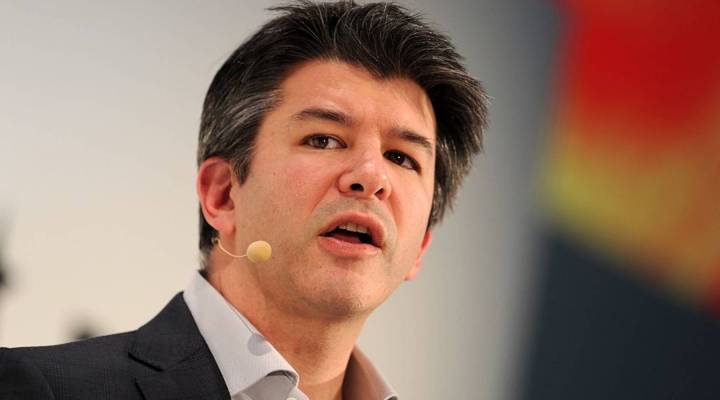 COPY
"It all comes down to what extent Travis Kalanick buys into the need for change,” said Adam Lashinsky, author of the new book, “Wild Ride: Inside Uber's Quest for World Domination.” Above, Uber CEO Travis Kalanick. TOBIAS HASE/AFP/Getty Images

"It all comes down to what extent Travis Kalanick buys into the need for change,” said Adam Lashinsky, author of the new book, “Wild Ride: Inside Uber's Quest for World Domination.” Above, Uber CEO Travis Kalanick. TOBIAS HASE/AFP/Getty Images
Listen Now

Uber has had its fair share of success and scandal since it launched in 2010. At the company’s core is CEO Travis Kalanick who wants to fix a ride-hailing system he sees as broken. While this notion of disruption isn’t new to Silicon Valley, Kalanick has taken the idea further to explicitly operate as if rules and regulations do not apply.

“Uber came into cities and said we don’t think these regulations match the modern world and so we’re going to ignore them,” said Adam Lashinsky, executive editor at Fortune magazine and author of the new book “Wild Ride: Inside Uber’s Quest for World Domination.” Lashinsky’s reporting for the book includes hours of exclusive interviews with Kalanick.

Lashinsky said the strategy, which hinged on getting prospective customers to lobby city officials on its behalf, largely paid off. But customers and employees are starting to voice major complaints about the Uber’s rule-breaking culture. In particular, the company has come under fire for tolerating workplace harassment.

“Uber has a lot of money and they’ve hired a lot of good people and they have the capacity to professionalize,” Lashinsky said. “It all comes down to what extent Travis Kalanick buys into the need for change. If he drags his heels and says… ‘people don’t appreciate how far we’ve come doing it the way we’re doing it,’ then they won’t change.”

Thus, it’s Kalanick’s character that Lashinsky has dug into, starting with an email that Kalanick sent in response to Lashinsky’s initial interview request.  “He responded to say, first of all, he was very flattered that I wanted to write a book about Uber,” Lashinsky recalled, “but that the time wasn’t right and if I persisted in writing a book about Uber, he would sabotage my project by finding someone else to write an authorized account.”

He did persist and Kalanick eventually agreed to speak to him for the book. What follows is a chronicle of ups and downs, of perseverance as strength and weakness, and what it feels like to face intense public scrutiny. That pressure may have reached its peak earlier this year after a video surfaced of Kalanick arguing with his own Uber driver about company policy.

“He will tell people that Uber is his baby, that Uber is his life, you know he doesn’t have a family, he’s not married,” said Lashinsky. “He lives it, he embraces it, he relishes it, but obviously it can be a bit much at times.”

Click the above audio player to hear the full interview with Adam Lashinsky.