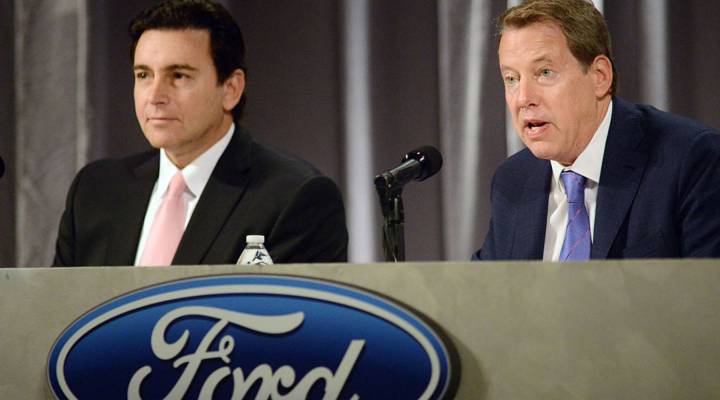 COPY
"We need to move faster with great clarity so that everybody understands where we're going, our employees, our investors, and the public" said Bill Ford, Ford's executive chairman. Above, a picture of Ford and former CEO Mark Fields. William Thomas Cain/Getty Images

"We need to move faster with great clarity so that everybody understands where we're going, our employees, our investors, and the public" said Bill Ford, Ford's executive chairman. Above, a picture of Ford and former CEO Mark Fields. William Thomas Cain/Getty Images
Listen Now

Today in corporate shakeups, Ford CEO Mark Fields has been replaced by Jim Hackett, who most recently lead Ford’s autonomous car division. The official word from Ford is that Hackett’s promotion is a new direction for the company, which hopes to transform itself. Under Field’s tenure, Ford stock prices fell, but was it enough to warrant Field’s removal? To fill in the blanks and get an idea of where Ford might be headed, Marketplace host Kai Ryssdal spoke with Ford’s executive chairman, Bill Ford. Below is an edited transcript of Kai’s interview with Ford.

Kai Ryssdal: Why did you make this change, sir?

Bill Ford: Well, you know, this is this is a time of great change in our industry, and we have unprecedented opportunities in front of us. And we needed a transformational leader like Jim Hackett who’s done it before, transformed an entire company and industry, and to great success. So, you know, it’s unusual times that we’re in. And it requires a different type of leadership.

Ryssdal: Let me ask you a more focused question, then. Mark Fields was with the company for 25, 28 years, groomed for the CEO role, was there for three years. Would he still have his job if Ford share price was still at 17 bucks, where it was three years ago when he got the job?

Ford: Well, you know the share price is the fallout of a lot of different things. And, you know, Mark did some great things for the company, not the least of which delivered us record profitability over the last several years. And so, now we have the financial wherewithal to create our own future. And for that I will always be enormously grateful to him. Mark had a great career, and he did great things for our company. We’re in a different time now, on a different place, even than we were three years ago. We have different competitors coming into our space, the rate of technology is just exploding, and we need to speed up our decision making.

Ryssdal: That’s it, you just need to move faster?

Ford: We need to move faster with great clarity so that everybody understands where we’re going, our employees, our investors, and the public. And there’s a balance because you don’t want to tip your hand too soon. You don’t want to telegraph every move you’re going to make. And yet, you also have to be clear enough so that people understand the mission you’re on, and they buy into the mission.

Ryssdal: You have the best-selling vehicle in the country, the F-series pickup. You have it for decades and decades and decades. How hard is it going to be for Jim Hackett to take that, right? To take that sales profile, and the profit that comes with it that Wall Street really likes, and keep investing in the future of this company?

Ford: Well, you know it’s interesting you mentioned the F-series. There’s a tremendous amount of change in this F-series versus the old one. I mean, we went to all aluminum, we introduced the eco-boost engine, which allowed people to downsize their engines in a space where some people said customers will never accept smaller engines. And all we’re going to do is continue with that pace of innovation, but always, always knowing what the customer wants.

Ryssdal: You say you need speed in decision making in this company. How much time do you figure Jim Hackett has to get it right?

Ford: Well, I mean, there’s no stopwatch. It’s really, you know, it’s a progression. But I know Jim, and I know how he likes to work, and I think you’ll start to see things from Jim pretty quickly.

To hear Kai’s full interview with Ford and analysis from Dan Neil, auto columnist at the Wall Street Journal, click on the audio player at the top of the page. 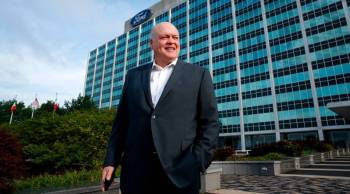