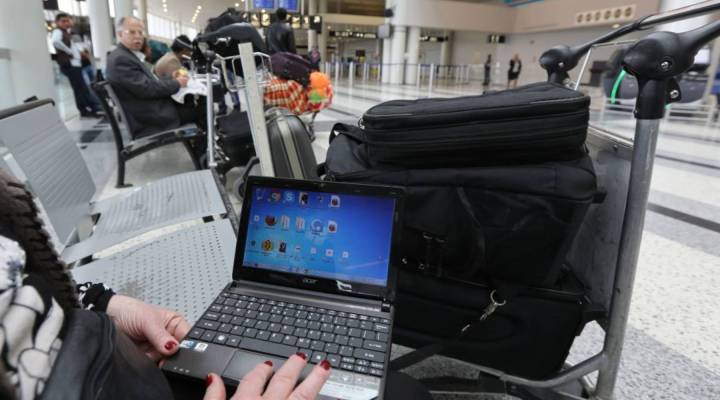 COPY
A Syrian woman travelling to the United States through Amman opens her laptop before checking in at Beirut's international airport in March. ANWAR AMRO/AFP/Getty Images

A Syrian woman travelling to the United States through Amman opens her laptop before checking in at Beirut's international airport in March. ANWAR AMRO/AFP/Getty Images
Listen Now

U.S. and European officials are meeting in Brussels today to discuss a potential ban on laptops on flights from Europe to the U.S. The Trump administration’s reasons are concerns about safety and terrorism. What impact could the ban have?

Aviation consultant Michael Boyd said a ban on tablets and laptops would be a deterrent to flying. Trans-Atlantic flights can be long and boring, but they give business travelers valuable hours to work on their devices.

“Many of those business people will say, ‘I’ll find other ways of communicating, because if I can’t take my laptop, I won’t be effective on this trip,” Boyd said.

“They make up over 50 percent of the revenue,” Boyd said. “So everyone you lose, because he or she does not want to check their Macbook Pro, is going to be a real hit.”

Some experts see today’s meeting as a sign the ban will likely go through. A spokesman for the Department of Homeland Security said a decision has yet to be made, but that a ban would largely mirror one set in place on flights from several Middle Eastern airports.

“It is likely to follow the decision that was announced back in March, that it would restrict from the cabin of aircraft on certain flights electronic devices larger than a cell phone or smartphone,” said David Lapan.

It’s still unclear which European airports would be affected.

“The type of restrictions and the locations is still to be determined,” Lapan said.