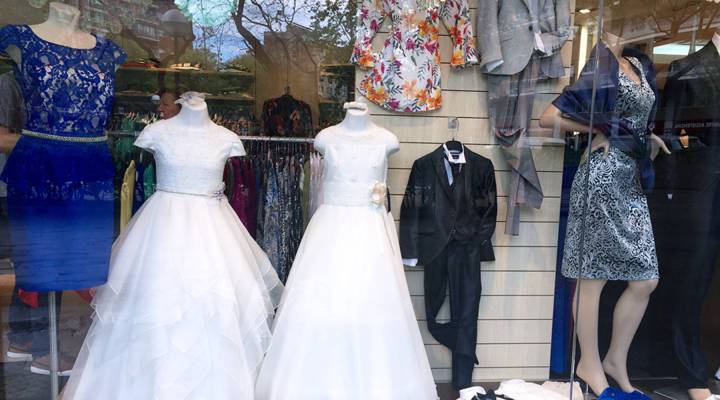 COPY
Arxé Moda is one of many clothing stores in Barcelona that specializes in custom-made dresses for first communions. The bridal-like gowns can cost anywhere from $400 to $500. Lucia Benavides

Arxé Moda is one of many clothing stores in Barcelona that specializes in custom-made dresses for first communions. The bridal-like gowns can cost anywhere from $400 to $500. Lucia Benavides
Listen Now

All across Spain, children are attending catechism classes in preparation for their first communion this spring. In late March, around 50 boys and girls between seven and 10 years old gathered in the courtyard of a 16th-century church in Barcelona. They threw their backpacks in a corner as they came in and formed various circles. When asked what they were most looking forward to for the big day, one response stood out.

“The party!” they yelled, followed by an eruption of laughter.

Spain has been one of the countries in Europe hardest hit by the economic crisis, and it has yet to bounce back: the unemployment rate is still about 19 percent. As a result, Spaniards have cut back on many aspects of life. They’re having small civil ceremonies instead of big church weddings, which have declined by about 50 percent since 2008, according to a study done by consulting firm KPMG for the Spanish Episcopal Conference, an administrative institution composed of all the bishops of the dioceses in Spain.

Yet families continue to celebrate first communions at the same pace. In 2014, according to the same study, families in Spain spent almost 600 million euros on these celebrations — that’s around $640 million. And the multimillion-dollar business continues to thrive.

First communion season falls in May. Spaniards can expect restaurants to be full during the weekends and see decorated cars around town taking boys and girls, all dressed up in a suit or white gown, to the local church.

The parties families spend all that money on come after the first communion, the Catholic ceremony where a person receives the communion wafer for the first time. But what used to be a small post-ceremony meal between close family members has turned into a celebration that takes months to plan. It includes bridal-like dresses for girls, entertainment for kids, professional photo shoots — and can cost a couple of thousand dollars. Assumpta Arxé, owner of an eponymous clothing store in Barcelona, said it’s almost like a small wedding.

“And in the small towns, neighbors get together to see which girl has the best dress,” she said.

The store is one of dozens around town specializing in custom-made dresses for first communions. Arxé sells about 100 dresses per season at $400 to $500 each. She said between the dress, shoes and accessories, parents spend no less than $600 on each child — and that’s excluding the price for the venue and food, which can cost between $50 to $170 per guest.

Francesc Nuñez, sociologist at Universitat Oberta de Catalunya, said first communions are a deeply rooted tradition. He points out that there’s no secular proxy for this rite of passage, as there may be for weddings.

“People strain themselves financially, they spend more than they would in other circumstances. They may even ask for money or take out a loan so they can have the communion that God demands,” he said. 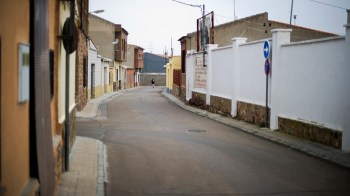