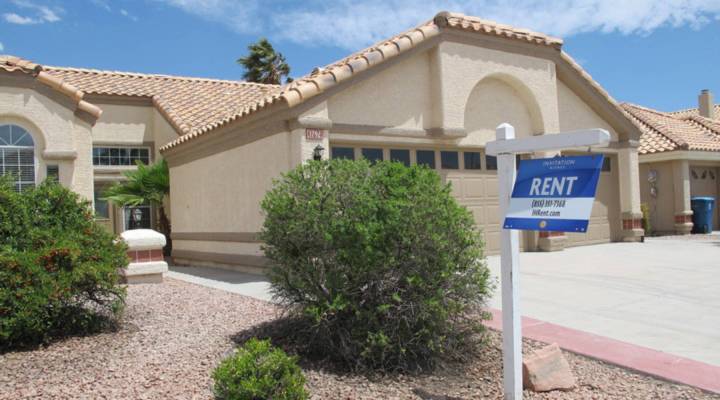 COPY
During the housing crisis, investors with cash snapped up tens of thousands of distressed properties and converted them to rentals. Kimberly Adams/Marketplace

During the housing crisis, investors with cash snapped up tens of thousands of distressed properties and converted them to rentals. Kimberly Adams/Marketplace
Listen Now

We’re becoming a nation of renters — and not just apartment dwellers. Since the housing crisis, more renters are writing the monthly check for single-family homes. More of them are also writing checks to corporate landlords like Invitation Homes, Colony-Starwood, and American Homes 4 Rent.

Back in 2005, “there were about 10.5 million single-family rental properties,” said Karan Kaul of the Urban Institute. “Today that number is north of 17 million. That’s almost a 70 percent increase. If you look at the other segments of the rental market,” he said, “the growth in those units has not been close to what you’re seeing in the single-family market.”

During the housing crisis, when foreclosures were mounting, investors with cash snapped up tens of thousands of distressed properties in cities like Atlanta, Phoenix and Las Vegas, and converted them to rentals.

Jade Rahmani is managing director at financial services firm Keefe Bruyette & Woods, which works closely with some of the largest companies in this sector. He said even though the homes purchased by large institutional investors accounted for only about 1 percent of the market (about 208,000 properties nationwide), the sales helped end the free fall in prices during the housing crisis.

“These companies entered in and had the capital to invest directly in cash. Then they also put in on average around $20,000 of capital improvements.”

In places like Las Vegas those renovations and improvements meant houses that might have been abandoned were occupied and updated during the worst of the crisis.

Now, like much of the country, the Vegas market is rebounding, with prices up almost 13 percent in the last year alone, according to the Greater Las Vegas Association of Realtors. But the slow recovery changed things, said John Restrepo of RCG Economics in Las Vegas.

“A number of institutional investors came in and started buying groups of homes to turn them into rental properties with the anticipation that in a few years, they could then resell those homes as the housing market came back,” Restrepo said. “It’s not worked out quite like they anticipated, primarily because the housing recovery took a lot longer than anyone anticipated.”

But it seems to have worked out pretty well, at least for these corporate landlords. Over the past week, several of the big players have rolled out solid quarterly earnings. Continued growth, said Rahmani of KBW, will depend on creating concentrated areas of housing where rents are rising and companies can bring down maintenance costs.

“The real way [toward growth] is to be a scaled player, which means to own … north of 500 homes in a given market so that you can efficiently service the homes,” he said.

With today’s housing supply so tight and prices rising, it’s not as easy for companies to snap up cheap homes anymore, so some are planning to expand by building new houses, even entire neighborhoods, and putting them up for rent.