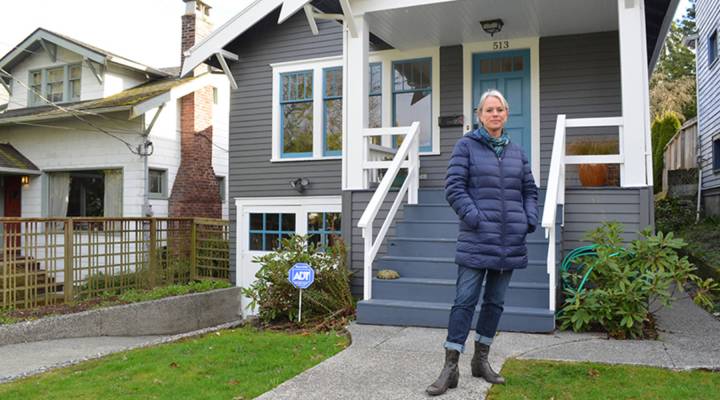 COPY
Beth Bylund outside one of the houses she rents in north Seattle. Eilis O'Neill

Beth Bylund outside one of the houses she rents in north Seattle. Eilis O'Neill
Listen Now

Jessa Lewis and her 14-year-old daughter share a two-bedroom basement apartment with another mom and her daughter. Lewis said they all live together, in part, because it’s really hard for single moms to find an apartment to rent in Seattle.

It’s illegal to discriminate against renters for things like their race or because they have children, but housing advocates say it still happens. Now, Seattle is trying a radical new approach to ending housing discrimination with a law that says landlords have to rent to the first qualified applicant. Landlords are not happy, and they’re suing.

Jessa Lewis in the basement apartment she shares with her daughter in Seattle.

Seattle City Councilmember Lisa Herbold proposed the new law, called the “First in Time” rule, to try to give renters like Lewis a shot at living where they want.

“People of color are being discriminated against, people based on their family size, on their gender,” Herbold explained. “Approximately 60 percent of fair housing testing has some evidence of bias found.”

The law took effect this January, and the city said it will start enforcing it in July.

Here’s how it works: Landlords publish the criteria for renting a unit that can include things like proof of income, a certain credit score or rental history, or positive references from past landlords.

“Landlords must tell tenants what the baseline qualifications are,” Herbold said. “Then, when somebody applies and meets them, the landlord must offer the unit to that person.”

In other words, it’s first come, first served. The first person who meets the landlord’s own criteria gets the apartment.

But landlords say the law’s much too broad.

“The city council, I think, is managing to the lowest common denominator,” said Beth Bylund, who rents three houses in north Seattle. “Instead of going after the landlords that are horrible and mistreating people, they’re putting us all in kind of a sack.”

That’s why Bylund joined other landlords to sue the city over the new rule.

The lawsuit claims the ordinance is unconstitutional because it takes away property owners’ right to choose their tenants and to exclude unwanted people from their property.

Ethan Blevins, the lawyer on the case, said the law hurts renters by encouraging landlords to come up with onerous rental criteria.

“One of our clients says his rental criteria is several pages now,” Blevins said. “That makes it harder for people to be able to satisfy criteria, specifically young individuals and arguably the very people that Seattle wants to help: vulnerable populations.”

Furthermore, Blevins added, the new law still gives some renters an advantage if they have a car to zip around and check out apartments, internet access at home to make it easier to submit applications or a flexible schedule to apply for units as they come on the market.

But Herbold said Seattle’s complaint-based system “can’t really address these broader, what I see as sort of systemic issues around how people process rental applications. The ordinance itself is intended to legislate a process so that people will not inadvertently break the law.”

Housing advocates say other cities will look to Seattle to see how successful the new rule is and how the lawsuit turns out.