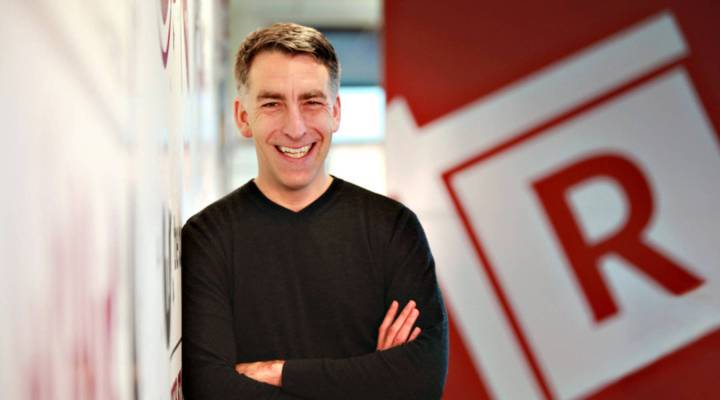 COPY
“We still have to be financially disciplined in a different way than Google or Facebook, because we still employ real people to help sell these houses,” says Glenn Kelman, Redfin CEO. Photo courtesy of Redfin
Corner Office

“We still have to be financially disciplined in a different way than Google or Facebook, because we still employ real people to help sell these houses,” says Glenn Kelman, Redfin CEO. Photo courtesy of Redfin
Listen Now

Kai Ryssdal: What do you tell people when you go to dinner parties and you say, “I’m the CEO of Redfin,” and they say, “What?”

Glenn Kelman: I say, “How could you not know about Redfin? We’re a technology-powered real estate broker, so the idea is to help people buy and sell homes, but to use technology to make it better and more efficient.”

Kelman: It means you save half the commission. It means that you get better service because your agent can get you into a home on a moment’s notice. It’s sort of like Uber or Lyft for real estate. It’s not a pure software company, and it’s not a real estate brokerage. It was sort of hard to get funded because most people want you to be one or the other. But now, I think, there’s a real movement in Silicon Valley to support these kinds of businesses. They create different kinds of jobs, but they also attack much larger opportunities.

Ryssdal: So let’s talk, actually, about a couple of things that you rolled into that answer. First of all, you mentioned you’re Uber and Lyft, but your employees are actually your employees as opposed to whatever Uber and Lyft drivers are, because, you know, that’s still sort of up in the air. Right? I mean you hire them, and they’re full-time employees.

Kelman: We employ thousands of real estate agents. We offer them health care and salary, and we give them an opportunity to earn stock options. And they’re totally different than the people I’ve worked with throughout the rest of my career. I was used to computer scientists from Stanford and MIT and Harvard, and it’s been the best thing that ever happened to me. But I also think it’s been a really good thing to happen to America, because technology companies shouldn’t just benefit a few graduates from a few universities with computer science degrees or math degrees or something like that. It should benefit everyone. It should make things better for the consumer, but it should also make things better for the people doing the work.

Ryssdal: So let me ask you then, getting to the consumer for a second. How come real estate has not been, I’m going to make up a word here, “electronicized” the way travel has? I mean, I can’t tell you the last time I spoke to an actual person in buying an airplane ticket. But, you know, the housing and real estate, you still have to do that despite your best efforts.

Kelman: So there’s a number of factors. The first is that it’s a cooperative industry, so there’s one agent listing the house, there’s another agent who is representing a buyer and the two of those folks have to cooperate. So if you’re trying to disrupt that market, you’re working with another real estate agent who is not interested in being disrupted. So I think that’s part of it. The other part of it is that the consumer buys a house once every seven years, so it’s an infrequent purchase. People tend to be risk averse. But I think that’s finally changing. If you look at the numbers, about 500 million bucks went into real estate technology in 2013. Three billion dollars went into real estate technology this year. And so we’re seeing this consensus on Wall Street and everywhere along Sand Hill Road and in between.

Ryssdal: Where all the VCs are, the venture capitalists.

Kelman: Yes, that real estate is changing, that the fees are going to come down and that there’s a better way to do things, that consumers deserve better service and they probably can use technology to get a better deal.

Ryssdal: Are you guys still startup? Would you say that?

Kelman: You know, Jeff Bezos just wrote a letter to shareholders about how it’s still “Day 1,” and I think it’s “Day 25 years” for Amazon. And I love that mentality. You know, even though we’ve got a couple of thousand people, we’re competing against folks who have way more money than we do, have way more numbers of real estate agents and listings and everything else. So, we’ve just got to be tougher and scrappier than everybody else or we’re gonna die.

Ryssdal: What was interesting about that Bezos letter, the CEO of Amazon, of course, is that he said if you start acting like it’s Day 2, therein lies ruin.

Kelman: Absolutely. I don’t want to get too philosophical about it, but there’s this novel, “Love in the time of Cholera,” and at the end of it they say, “How long can we keep going up this river?” And the hero says, “Forever.” And that’s how I feel about Redfin.

Ryssdal: Are you guys profitable yet?

Ryssdal: Seems to be a problem.

Kelman: Yes. I want to say that it’s a problem if you’re growing as fast as we are, in a market that’s as large as we are. So we still have to be financially disciplined in a different way than Google or Facebook, because we still employ real people to help sell these houses. It’s a tough and dirty business, crawling around the attic to see if there’s rat traps in there and see if the house is clean.

Ryssdal: I don’t know if this will come across on the air, but you are — and I say this not pejoratively, I hope — you’re a quirky dude, man.

Kelman: What did I do wrong?

Ryssdal: You didn’t do anything wrong.

Kelman: I just wanted to tell you, my wife worships you. I told her I was going to meet you. And she said, “Don’t be that way.”

Kelman: [Marketplace producer] Bridget [Bodnar] is calling me, and I’ve got my wife on line two, and she says, “Don’t be that way.” And I never found out what she meant. And now she’s going to say —

Ryssdal: No, this is great, because it goes to the point, which is this: You say what you think, and you are effusive and engaged about the mission of your company, which I will tell you from personal experience, not everybody who sits in that chair as a CEO is.

Kelman: You know, if somebody were more passionate about Redfin, how would she not be more qualified to have my job than I am? Like, that’s the thing I have to be the best at. I can be dumber than other people who work at Redfin. I can be screwed up in all sorts of ways, but if I actually care less than someone else, how could I possibly qualify to be the CEO? That’s how I feel about it. It’s not manufactured. And let me explain a little bit about this. So I started a software company with a couple of other folks. It went public. We made plenty of money. And I thought it was this incredible mission. But in fact, we sold software to Halliburton, we sold software to Frito-Lay and Pepsi and all these companies that didn’t necessarily do good things. And at the end of it, all these people who I thought were my brothers in arms, who I thought we were doing something beautiful, actually, it was just all about the money. And the deal that I made with my family and myself is that I was never going to do that again. And Redfin, you know, it’s a business that has hundreds of millions of dollars in revenue. It’s doing great in lots of different ways. But the thing that I really worry about is that it will cease to be a good thing, and it’ll just be a money-making thing. And then all will be lost, because eventually, if you’re not a good thing, consumers aren’t going to want to work with you, employees aren’t going to want to work with you. Investors probably will. But you really have to be that thing. Otherwise, it just all collapses sooner or later. And so, there’s this argument that you have to put shareholder value first, and nobody realizes that to do that, you have to put what you really believe in first.