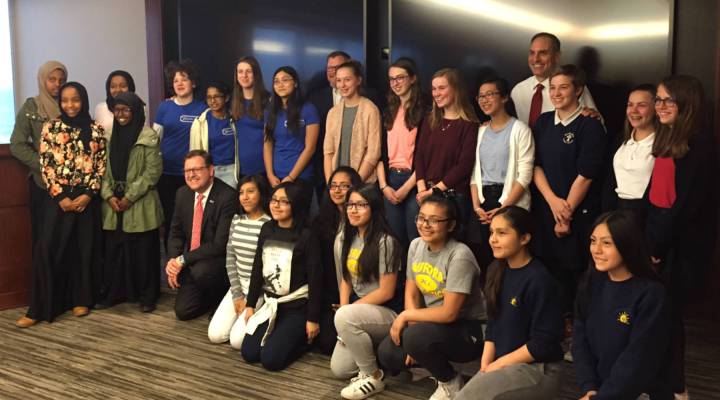 Each year, 10,000 girls from around 80 countries participate in a challenge called Technovation. They identify problems in their communities, and with mentoring, create apps to solve the problems. U.S. Bank backed six teams of girls, made up of Latin American and Somali immigrants as well as some from more traditionally white middle-class suburbs, to come up with financial apps for the competition.

In the bank’s hometown, Minneapolis, some of those young app developers met in a junior high classroom to practice their elevator pitches for apps they’ve spent weeks developing.

“Young adults are spending their money on things they don’t need, and parents are getting worried,” started one girl, reading from a script.

“That is why we have created this app,” chimes in another. “This app is named ‘Piggy Saver.'”

Piggy Saver helps kids save money. Catherine Gonzalez, 14, worked on it with the help of a local tech startup and an app-building template. She’s a Mexican immigrant and has been coding for two years. She said she could use the app herself to manage money she gets from chores, something she has a hard time doing.

“I like to spend a lot of money with Cheetos and clothes and everything like that,” she said.

Piggy Saver includes a quiz about financial choices and a financial goal tracker. Deyse Sanisaca, 13, said she joined the Technovation team with another goal in mind. Her mother, an Ecuadorean immigrant, told her it could help her socially.

“I may have opportunity to make new friends, since I don’t have many friends at my school,” she said.

Stephanie Hammes-Betti, senior vice president of innovation at U.S. Bank, said the girls’ ideas have given the bank insights on the spending and saving habits of different kinds of families.

One team’s app actually helps parents, not kids, save money. Hammes-Betti said that was identified as a goal “because the kids recognize that in their family, it might take the mom or the dad some time to get the money in order to pay them for chores, for example.”

Another reason U.S. Bank got behind the project? They want these teenage girls to consider working for the company someday.

“How many of you have a bank account?” asked U.S. Bank CEO Andy Cecere at a recent meeting of the app-development teams the bank sponsored. Several girls raised their hands. “Very good,” he replied, “so you don’t need an app for that.” One of the girls’ apps had a function that allowed connected users to local bank branches.

The girls met in the bank’s board room around a huge oak table. It was kind of intimidating, but many girls were totally confident as they presented their apps to Cecere.

“Users of our app can practice in our stock market without risking real money,” stated one presenter.

Deysi, though, choked up during her presentation, describing her pride in the project. She wasn’t sure if that was OK.

“I think I did kinda bad because I started crying,” she said.

This reporter, for one, didn’t notice. Deysi seemed to do great.

While the U.S. Bank teams were eliminated over the weekend in a regional competition, other teams will eventually land at the Technovation World Pitch 2017 event and even win  the chance to pitch to Silicon Valley venture capitalists seeking to invest in their apps.