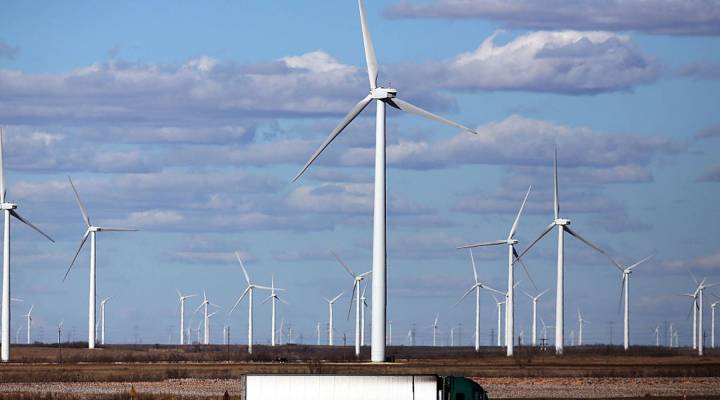 COPY
Pattern Energy said its wind farm, like the one above, will bring Comanche County $80 million over the next 25 years. Spencer Platt/Getty Images

Pattern Energy said its wind farm, like the one above, will bring Comanche County $80 million over the next 25 years. Spencer Platt/Getty Images
Listen Now

More than 20 percent of the electricity being generated in Texas now comes from wind. It’s a little-known legacy of former Texas governor — now U.S. Energy Secretary — Rick Perry. He got it all going with infrastructure and incentives more than a decade ago. Developers are buying up more and more land rights to build wind turbines. In Comanche County, Texas, it’s been an economic lifesaver, if an unexpected one.

Judge Bobby Arthur been living in Comanche County for all 77 years of his life.

“We’re primarily based strictly in agriculture,” he said. When he was a kid, Comanche was the place for one crop: peanuts.

The peanut industry in Comanche collapsed in the early 2000s, when a long-standing federal subsidy disappeared. Arthur heard talk of people putting their land up for sale and leaving town. Unlike a lot of Texas, Comanche doesn’t have oil and gas under its land. He started looking around for anything to keep Comanche County going.

“I don’t care where you’re from, as long as you’re willing to keep Comanche going, have the income coming to Comanche, we’ll take anything we can get,” he said.

He talked with other rural judges in a similar pickle, and they told him what they were looking into: renewable energy.  In the early 2000s, then-Texas Gov. Perry started building infrastructure and financially supporting renewable energy, specifically wind and solar power. Arthur got county commissioners to approve more tax breaks and started making phone calls to energy companies.

“I’d do a little research on some of these different companies,” he said. “They started getting more prevalent in the area, so they started coming to me.”

Arthur felt like he had found a needle in a haystack. Elements came together for a huge wind farm called Logan’s Gap. The judge went to local landowners and sold them on the project. After years of dealings, today Logan’s Gap produces enough energy for 50,000 Texas homes a year. It’s run by Pattern Energy, which sends more than half of the electricity produced there to Wal-Mart. More than half the turbines are located on the Dudley Bros. ranch.

John Dudley runs the finance side of his family’s purebred cattle company, Dudley Brothers registered Hereford operation. His family ranch has been here since 1938. When Dudley got an offer to put wind power on his property, he had just one question for other ranchers who’d signed deals:

There are four or five of the 87 Logan’s Gap turbines visible from his office. His brown Hereford bulls graze among them. He signed a nondisclosure agreement, so he won’t say how much he makes from the wind power, but says it’s made life on the ranch a lot easier.

But some people around here don’t think wind farms are a good fit.

Jeff Tucker retired as a firefighter in Fort Worth and bought about 300 acres.

“We came here to, frankly, move our family from the city to a different time, a different style of living,” he said.

He brought his wife and three kids out here for fresh air and wide-open skies. He said wind turbines ruin his Texas sunsets. He’s organized an anti-wind farm group called Won’t Feel Like Home. He posts research on Facebook casting doubt on the viability of the industry. He took me out on his land to get the picture.

“See this ridge right here?” he asked. “It goes back behind us, and at night, you can see those blinking lights, looks like something out of World War III, space aliens.”

Tucker said he was offered a contract to have wind turbines on his property. He refused. He holds town meetings and goes door to door, urging landowners to push back against expansion of the wind farm, which right now is just in phase one.

Pattern Energy said the wind farm will bring Comanche County $80 million over the next 25 years. A lot of these Texans don’t mind wind turbines in their sunsets if it means better roads, better schools, better everyday life.