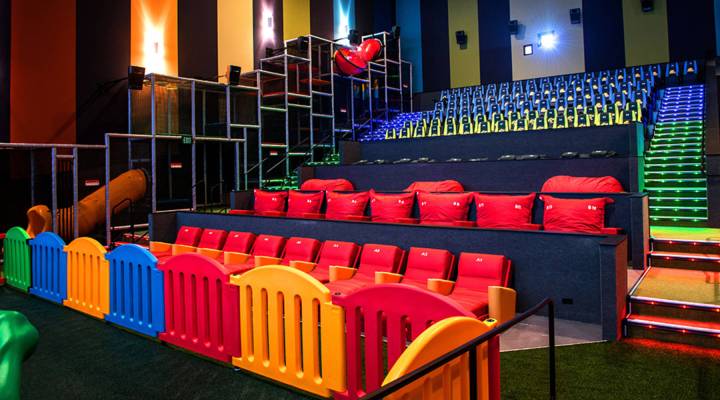 Now some theaters have turned their attention to the younger set, including Cinepolis USA, a theater chain that’s added kids’ climbing structures and play spaces to a couple of its theaters. Kids get to play before the movie and at a 15-minute intermission.

Kids between the ages of 2 and 17 make up nearly a quarter of the moviegoing audience, according to data from the Motion Picture Association of America. And younger kids go to movies with their parents.

“Kids have a big influence on their parents, which cinema they want to go to,” said Tim Barr, CEO of Ferco Seating. His company sells theater chairs, including rainbow-colored kids seats costing about $200 each. “Cinemas are showing the same movies, they have the same popcorn, the same sound systems,” he said. Kids’ auditoriums can set them apart.

Theaters are trying other tricks, too.

AMC is reworking its menu, adding kid-friendly chicken tenders and giant pretzels. And theaters like the TCL Chinese Theatres in Hollywood are building esports auditoriums, a place to play, and watch people play, video games.

“I think it’s another great opportunity to get moviegoers into the audience,” said Alwyn Hight Kushner, president of the TCL Chinese Theatres. “Young people that might be coming to the theater for a video game tournament will become potential customers for movies as well.”

It can all seem a bit gimmicky. But if brightly colored seats, video games and kiddie gyms sell tickets, that’s what matters to movie theaters.