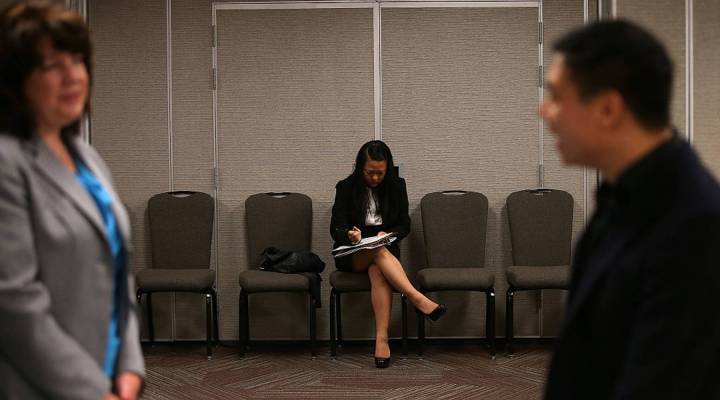 Today’s job report has unemployment in April falling to 4.4 percent, a decade low (that we hit last in March 2007, before the recession). That lower unemployment is supposed to make for an ever-tighter labor market for employers. With fewer people looking for work, employers should need to lure candidates away from other jobs, which means sweetening the pot with better benefits and higher wages.

Well, that’s the theory: As unemployment goes down, inflation in wages goes up. It’s captured in an old economic concept called the Phillips Curve. Except right now, wages are not going up — not very much, anyway: 0.3 percent in this April jobs report, just 2.5 percent year over year. What gives?

The really low unemployment and tight labor market we have now should be boosting pay and living standards more, said Bernie Baumohl at the Economic Outlook Group.

“It’s really quite amazing,” Baumohl said. “We have 2.5 percent growth in wages now, precisely the same growth that we saw in 2009, when the jobless rate stood at 10 percent.”

In theory, employers should have to compete harder to hire workers and offer higher pay to get them. But Vincent Reinhart at Standish Mellon Asset Management said the job market’s out of whack, partly because worker productivity is barely improving.

“If we’re not getting productivity, i.e., increases in output-per-hour, then there’s just less of a larger pie to pass along to workers,” Reinhart said.

Economist Cathy Barrera at the job site ZipRecruiter said she thinks employers are likely holding back on wages because of political uncertainty.

“The labor laws, tax laws, health care right now is a little bit up in the air,” Barrera said. “And all of those impact employers’ bottom line.”

Baumohl said our orthodox economic models — like the Phillips Curve that says low unemployment drives wages up — may be out of date.

“Now, with the U.S. much more integrated into the global economy, companies can outsource, find labor anywhere they want around the world,” Baumohl said.