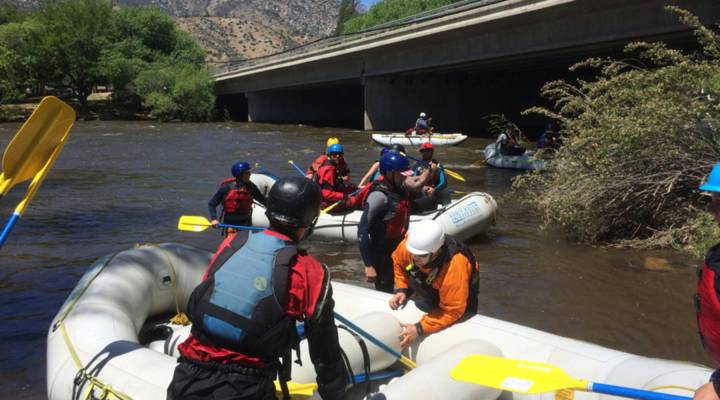 This big snow comes on the heels of several abnormally dry years. There’s been little to no snowpack in recent seasons due to California’s massive drought. The bust then boom in snow has meant a wild ride for businesses that depend on it — and the water it provides as it melts.

Recently a class of whitewater rafters training to become guides for Kern River Outfitters sloshed out of the Kern River in the Sierra Nevada Mountains. Despite their layered wetsuits and splash jackets, several shivered and clutched themselves for warmth as they exited the icy water. The snowmelt that chills the river is also swelling it to levels unseen during several years of drought. The whitewater rafters were thrilled with the morning rapids.

“It was gnarly. It was good!” said Maren Roberts, one of the trainees.

Becoming an effective raft guide means learning the locations of every rapid and every calm spot so that they can direct paying visitors on how best to paddle down the river. It also means knowing how to rescue someone who goes overboard. Roberts and her classmates drilled rescue moves, like tossing rope into the rapids from shore.

A proper throw means squarely hitting the drifting swimmer with the rope as they flow downstream, a skill Roberts admitted she didn’t naturally have.

“I threw, and I missed, but that’s OK,” she said. “Practice makes perfect.”

This is the first time in years Kern River Outfitters expects to employ a full staff for rafting season.

This banner winter threw the company a lifeline. Matt Volpert owns Kern River Outfitters along with his brother. Their parents started the business, and for decades things flowed steadily. Then, California’s drought dried up revenue.

“Nothing” meant no trips and refunds on bookings — eventually a shuttered business. Volpert said to get by, he took odd jobs elsewhere, doing internet marketing and other gigs he can barely remember.

“I didn’t make any money during that time,” Volpert said. “I couldn’t save anything. I was broke, essentially.”

Owner Matt Volpert, right, said the calendar is filling up with reservations. Above, he and employee Dillon Cole roll up a raft Kern River Outfitters’ warehouse.

He and his brother’s fortunes changed this winter. Volpert said he watched the weather excitedly, his prospects for rafting getting better and better with every snowstorm on the mountains.

“Just knowing that you’re about to hit the guaranteed land where it’s like, OK, we will have not just a rafting season but a terrific one,” Volpert said.

In California, winter snow is good news for all outdoor recreation, but spring runoff is even more crucial for agriculture. The Sierra Nevada snowpack acts as a frozen reservoir that melts and delivers water in spring, when farmers need it.

Researchers said climate change means a warmer planet, where more precipitation will fall as rain too early in the year to be useful.

“The delivery of snow, which was so beautifully matched to sort of our needs, is going out of sync with our needs, coming more as water,” said Matthew Sturm, a scientist who researches snow at the University of Alaska Fairbanks.

Sturm said water that falls as rain needs to be stored in reservoirs and behind expensive dams in order to be useful as irrigation and drinking water. If it isn’t captured and stored, it becomes runoff that people can’t use. A healthy snow bank acts as natural — and zero-cost — water storage.

Sturm co-authored a recent paper with Michael Goldstein, a finance professor at Babson College, that looks at the economic value of snow. The less snow that falls, the more heavily we’ll rely on groundwater, Goldstein said, and we could face extreme impacts downstream if there’s no snowpack at all.

“If all this is going to disappear within, say, 15 years or 20 years even, it’s about a trillion dollars,” Goldstein said.

He said that estimate is with conservative pricing for water. At the higher end of the pricing spectrum that exists today, he said the estimate grows to $4.4 trillion. And those estimated costs are just for the Western United States, not the whole country.

Historically, snowy winters like this last one are worth tens of billions of dollars in water. But Sturm said don’t count on more of them.

“This is probably a temporary reprieve,” he said. “It’s not a full stay of sentence, if you will.”

Rafting company owner Volpert knows that drier days are in the future. That’s why he wants to expand to other locations, rivers that are more sure to get their snow melt. Such an expansion would help him spread the risk and better weather changing conditions.

In the meantime, he’s just enjoying the ride of a spring with heavy snowmelt.

“In terms of a whitewater year, this is gonna rank in the top five in the last 30 years probably,” Volpert said.

He said the company’s calendar is already filling up with reservations. More snow also means a longer season. Volpert anticipated his revenue this year could increase by 30 to 50 percent.

He said that extra money will have to go in the bank and repay his parents. He and his brother bought the business from them last year.

“You still have expenses, like, you’ve gotta buy new equipment,” Volpert said. “Hopefully, I can pay myself, you know. And then I also have to pay off the company, too.”