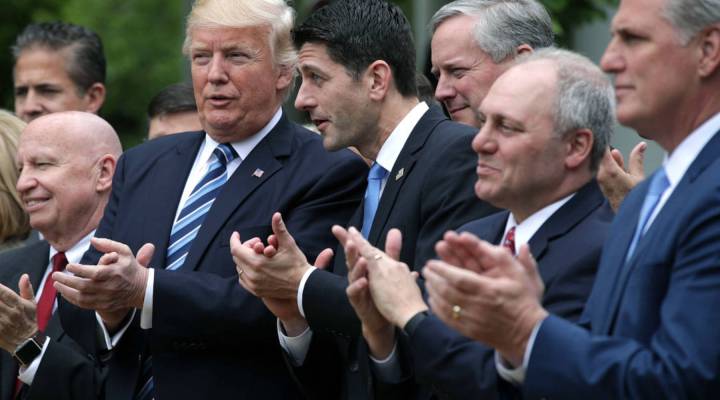 The House voted today to repeal and replace the Affordable Care Act with an amended version of the American Health Care Act, which was proposed by House Republicans earlier this year. Normally on major policy proposals like this one, lawmakers have non-partisan analysis from the Congressional Budget Office assessing the economic impact of the legislation before voting. The CBO estimated that under the first version of the American Health Care Act, the number of uninsured people would rise to 24 million by 2026 and the federal deficit would fall by $337 billion in the same period. However, the House voted today before the CBO could finish its analysis of the new version of the bill. Douglas Elmendorf is dean of the Harvard Kennedy School and served as the director of the CBO from 2009 to 2015. He talked with Marketplace host Kai Ryssdal about what the CBO score of the bill passed today might look like.

Kai Ryssdal: First of all, is it your understanding that this would be a totally new review for the CBO score on this bill?

Douglas Elmendorf: This bill looks different enough from the previous version that CBO will have to take its time and do a careful estimate. They’ll build on what they did for the original version of this legislation, but they’ll have to incorporate a number of new features.

Ryssdal: OK. So, if I’m a staff economist or analyst at the CBO beavering away down in the basement somewhere —

Ryssdal: OK, I am on the fourth floor. What am I looking at?

Elmendorf: You’re trying to understand how the bill will change the incentives and opportunities facing state governments, employers and individual families. You’re looking at what sorts of subsidies or penalties are available or are imposed on people who make certain choices. You’re looking at what state governments can do to avoid some of the rules of the Affordable Care Act and how those state choices would affect what individuals do.

Elmendorf: We have experience in different states at different times of changes in health care and health insurance opportunities. And we can use those to estimate how people respond. The biggest challenge is for changes of a sort we have not seen that before. And then CBO has to put together whatever shreds of evidence it can collect to try to paint a picture of what will happen from some more dramatic change. The change in the American Health Care Act would be a dramatic change. Some of that is undoing what happened in the Affordable Care Act, and CBO can look at what the health insurance market was like before the Affordable Care Act. But some of it is different, and CBO will do its best to pull together the shreds of evidence, as I said, from other situations and apply them to this new bill.

Ryssdal: Acknowledging that you are not in this CBO business any more, what is your best guess as to what the score’s are going to be when it comes out? And just to refresh people’s memory, it was like 24 million people losing or choosing not to have health insurance and something like $340 billion over 10 years being cut from the deficit.

Elmendorf: My guess is that even more people would lose health insurance under this new bill and that people with preexisting conditions will not be protected in the way that they would have been under the previous version. But that’s just a guess, and people should not think that just because I was CBO director that I can do the work that CBO does in my head, because I certainly cannot.

Ryssdal: Absolutely, and I grant you that point. One more question and then I’ll let you get on with your day. A lot of what’s going to happen with this bill will come after today. It will go through the Senate. There will be then, if it passes and becomes law in some form, there will be regulations and all sorts of things that will affect the eventual impact, would affect a CBO evaluation, right? Although you guys don’t do post-facto stuff.

Elmendorf: Yes. CBO will produce an estimate of this bill, then they will produce estimates of whatever bill the Senate takes up and whatever a compromise bill might be reached between the House and Senate. But it is a terrible mistake for the House to proceed without a CBO estimate at this point. That just violates the very sensible norms of knowing what you’re voting on before you vote.