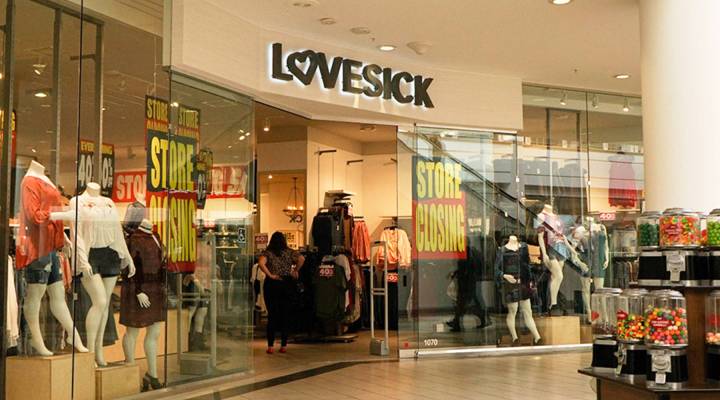 Plus-size women are losing an outlet for fast fashion. The Lovesick chain closed its 23 stores this week indefinitely for rebranding. Some stores may stay open longer to liquidate stock. Originally launched by Torrid, the brand targeted young plus-size women and teens, giving them the cute clothes they want instead of unflattering stuff they’ve had to put up with for years. So why is the brand being abandoned when there’s such an obvious demand?

It’s a pent-up demand, according to plus-size fashion blogger Jessica Torres. She said growing up, there were so few places to get clothes in her size that sometimes she would buy from the men’s section.

“I would even cut T-shirts up and then make them look different because we were so tired of the few options that we had.”

So when plus-size chain Torrid launched Lovesick as its younger, hipper, more affordable sister store last year, Torres said the response was huge, noting her friends’ Facebook posts that said things like “Don’t sleep on Lovesick! They have really cute stuff!” The response in March when Lovesick announced it was closing?

“That’s literally all I saw on my timeline,” said Torres.

It’s one less place for Julie Dugan, who frequents the location in West Covina, California, to try on clothes.

“Having that resource cut off,” she said, “is a huge disappointment.” Dugan, 36, said one of Lovesick’s major flaws though, was inconsistent sizing, which she attributes to the brand buying its products from various private labels. She also criticized Lovesick for increasing its size range downward to size 8, instead of upward to even larger sizes.

We took visual merchandiser Tony Lopez to a Lovesick store before it closed to get his take on whether the storefront and floor plan were effective.

Lopez said there are too many styles in its window: the festival look, dark bohemian, ’90s throwback. It should be a concise presentation, based on one current trend, he said. He said that in his opinion, Torrid does this better and has a more open layout inside the store that directs the shopper better and feels more fashionable. But, he added, Torrid is not targeting buyers under 30.

Retail analyst Marshal Cohen said Torrid, which was established in 2001, would want to grow with its customers instead of rebranding every five years, trying to capture consumers who are now adopting online brands. He said Lovesick may have been an effort to break away from the reputation of Torrid, but, “What it’s really doing … is just duplicating efforts, and not creating growth, just displacing the sales that exist.”

Torrid declined to comment on Lovesick’s closing, but Torres said plenty of women in the U.S. are still looking for a place to try on clothes that are size 16 and up.