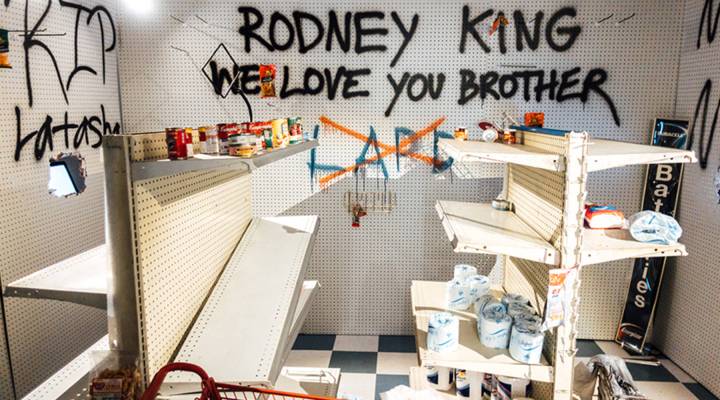 COPY
A room was transformed into a replica of a 1992 looted convenience store, part of the exhibit "Re-Imagine Justice" at the headquarters of the nonprofit Community Coalition in South LA. Libby Denkmann/Marketplace

A room was transformed into a replica of a 1992 looted convenience store, part of the exhibit "Re-Imagine Justice" at the headquarters of the nonprofit Community Coalition in South LA. Libby Denkmann/Marketplace
Listen Now

Saturday, April 29, marks the 25th anniversary of the Los Angeles riots. Some in the city now call what transpired “the uprising” or “the rebellion.”

It all started following the acquittal of four police officers who were caught on video beating an unarmed black man, Rodney King.

Amidst widespread arson and looting, more than 60 people were killed, hundreds more were injured and at least 1,000 businesses were damaged or destroyed. Estimates put the damage around $1 billion.

Today a few areas of what is now known as South LA are caught up in a real estate boom. But the community still bears the scars of 1992.

As the world watched images of looting and burning captured by local TV stations, Liz Anderson could see the flames of the riots three blocks away from her home.

“And I thought, ‘Oh, my God, the fire is getting so close, they’re going to burn down my house, my neighborhood.’” she said. “But it didn’t get this far.”

A resident of Leimert Park for 40 years, Liz Anderson saw fires from the 1992 LA riots burning three blocks from her home.

Anderson’s house sits beneath swaying palm trees in the historically African-American neighborhood of Leimert Park. She said some people she knew moved out in the early 1990s, scared off by the destruction of the riots and years of recession, gang violence and tensions with police.

She stuck around, and it’s paid off.

But economic recovery hasn’t materialized in other neighborhoods of South LA. After the riots, a public effort to attract $6 billion in commercial investment for job creation fell short, raising closer to $500 million.

Today, the poverty rate in South LA is about 33 percent, slightly higher than it was in 1992.

Aurea Montes-Rodriguez is executive vice president of the nonprofit Community Coalition. She said she’s frustrated by a number of empty lots that remain undeveloped here, like one down the street from her office in the Vermont Knolls neighborhood, where stores burned in ’92.

“Three acres of land that have been vacant blight would never be allowed in another part of the city,” Montes-Rodriguez said.

A lot remains empty in the Vermont Knolls district of South LA, where stores burned during the 1992 riots.

Montes-Rodriguez said South LA is beginning to attract more investor interest. A Metro line extension now connects part of the area to the beach and downtown LA, and a new line will link to the airport. LA County is making plans to join with private developers to build housing and retail around the new stations.

For some, that raises fears that low-income residents will be displaced. Labor/Community Strategy Center organizer Manuel Criollo said residents have to fight to ensure growth is shared.

Anderson said she and her Leimert Park neighbors get bombarded with postcards in the mail urging them to sell.

“I wouldn’t mind moving. But not yet,” she laughed.

Not far from her neighborhood, a 30-story apartment complex with restaurants and retail has been approved by the city council.

The project faces a lawsuit from neighbors who say it’ll raise rents and push longtime residents out.