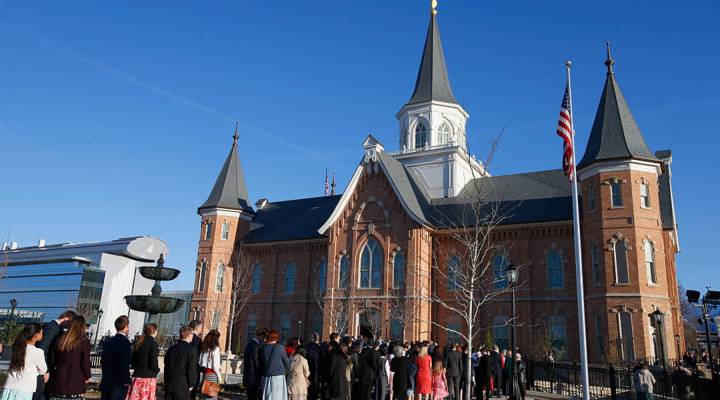 COPY
“Our goal is to promote transparency within the Mormon Church,” said Ryan McKnight, creator of MormonLeaks, a website where users post information anonymously about the Church of Jesus Christ of Latter Day Saints. Above, a line of people wait outside the Provo City Center Temple. George Frey/Getty Images
Hacktivism

“Our goal is to promote transparency within the Mormon Church,” said Ryan McKnight, creator of MormonLeaks, a website where users post information anonymously about the Church of Jesus Christ of Latter Day Saints. Above, a line of people wait outside the Provo City Center Temple. George Frey/Getty Images
Listen Now

On Marketplace Tech, we’re taking a deeper look at “hacktivism,“ activist hackers who use their digital toolkit to push a social agenda. But in their mission to make information more transparent or accessible to all, some hacktivists take a lot of personal risks when they go up against the status quo. MormonLeaks, a website giving members an avenue to post information anonymously about The Church of Jesus Christ of Latter-Day Saints, was set up by Ryan McKnight, himself a former Mormon. We talked to McKnight about how the website works, and what was at stake for him. We also reached out to The Church of Jesus Christ of Latter-Day Saints, which wouldn’t comment further on the on the existence of MormonLeaks and said it would not verify the authenticity of any leaked documents. Below is an edited transcript of Ryan McKnight’s conversation with Marketplace Tech host Ben Johnson.

Ryan McKnight: Well, our goal is to promote transparency within the Mormon church, the LDS church, and we feel that the LDS church has an ethical responsibility to be transparent with their finances and their corporate policies and procedures, and we feel that they fall short in that ethical responsibility. So we’re here to nudge them along, if you will.

Johnson: Tell me about the latest battle here between MormonLeaks and the church.

McKnight: On March 1, I believe, we leaked a PowerPoint presentation that was not meant for public consumption, and it was a presentation that was outlining the various identified issues and people who, in their minds, pose a threat to continuing membership in the Church, and how they plan to address those issues.

Johnson: Yes. Who are the people who are sending you this information? Are they members of the church?

McKnight: They are. Probably, you know, would be fair to characterize them as nonbelievers, but on the surface they’re sort of faking it. You know, everybody around them thinks they’re a believer — their family, their coworkers. There’s ex-employees that are also pretending to be Mormons still.

Johnson: Some would — probably, I would guess — some would accuse you of sort of religious persecution here.

McKnight: Oh, absolutely. It’s been done. I think what gets lost sometimes on the criticism is that there is nuance in the world. And just because I happen to not agree with the church and to see it in many cases as a not worthwhile organization, it doesn’t necessarily mean that I’ve got evil intentions, like many believing Mormons would have you believe.

Johnson: Do you think religion needs hacktivism and hacking?

McKnight: Maybe not every religion does, but I do think it definitely has a place. I mean, I think we’ve staked out a pretty, you know, a pretty solid ground in that world. And we’ve obviously shown in a short period of time that … it’s needed. So I think it would be reasonable to extrapolate that across, you know, religion as a whole.