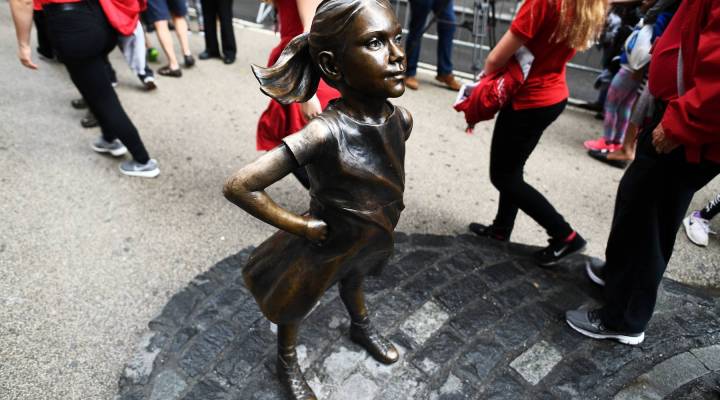 Turns out, the “Fearless Girl” statue is not just a feminist symbol, it’s also generated millions in free advertising for the financial firm that commissioned it.

Apex Marketing crunched the numbers and found that since State Street Global Advisors installed the statue in early March, it has been worth $7.4 million in advertising, according to Bloomberg. All the tweets, selfies and news reports mentioning the artwork resulted in:

Cue all the I-told-you-so’s from the statue’s critics.

Since it appeared on Wall Street, the statue and its origins have attracted their fair share of criticism. In its statement about why it placed “Fearless Girl” opposite the bull, State Street said it was calling on companies to increase the gender diversity on their boards. However, just three seats of State Street’s 11-member board are occupied by women.

Probably the loudest naysayer has been the artist behind the bull statue, Arturo Di Modica.

After the city of New York announced that the “Fearless Girl” statue would face-off with the bull until next year’s International Women’s day, Di Modica held a press conference demanding that the statue be moved somewhere else, away from the bull. Its current placing, Di Modica argued, makes the bull into something threatening instead of allowing it be as he intended it: a positive, optimistic message of prosperity and perseverance in the wake of the 1980s stock market crash.

What Di Modica might not realize is that his criticism of the statue has increased the number of its mentions on social media, increasing its value as an advertising tool.

The day that Di Modica held his press conference, social media mentions for the State Street Capital spiked. In fact, that number was even higher than the number of social media mentions that the firm received on the day when the New York City issued a year-long permit for the statue, analytics company Trackmaven told Bloomberg. Trackmaven, which measures social-media mentions, found that the day after the statue appeared, State Street got about 500,000 shares on social networks such as Twitter, Facebook and Instagram.

“Men who don’t like women taking up space are exactly why we need the ‘Fearless Girl,’” tweeted New York City Mayor Bill deBlasio. (That’s at least one more social media mention right there.)

Di Modica has yet to rule out the possibility of suing the city to get it to move to statue. Yet if he were to file such lawsuit, he could indirectly be helping State Street get even more free advertising.

In the meantime, the statue will remain just where it is — facing off with his bull, ready for more selfies.