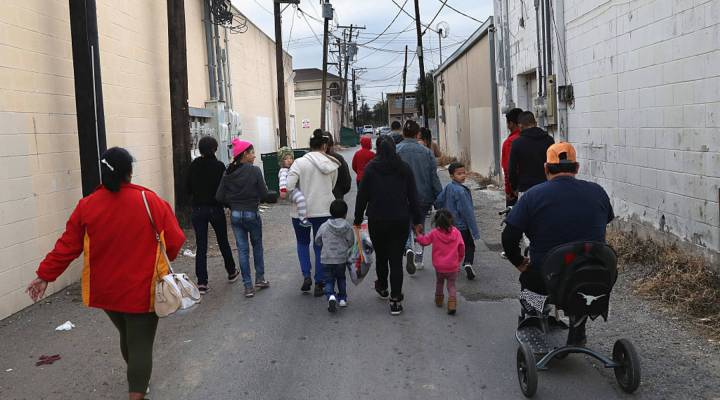 COPY
Immigrant families in McAllen, Texas, walk to a Catholic-run "immigrant respite center" before taking a bus from the border into the interior of the United States. John Moore/Getty Images
Economic Anxiety Index®

Immigrant families in McAllen, Texas, walk to a Catholic-run "immigrant respite center" before taking a bus from the border into the interior of the United States. John Moore/Getty Images
Listen Now

For more than a year, Marketplace has been working with Edison Research to measure how people feel about the economy. The latest Marketplace-Edison Research Poll is out this week. Respondents were given the choice between two statements: “Immigrants take jobs away from American workers” or “Immigrants do the jobs Americans don’t want to do.” Sixty percent of Americans chose the latter.

President Trump has ordered more deportations of people living in the U.S. illegally, and Texas has seen an increase in Immigration and Customs Enforcement raids. The Pew Research Center estimates that Austin, Texas, is home to more than 100,000 immigrants who live there illegally. They’re not just people doing those jobs Americans don’t want to do; they’re also consumers. A lot of them are staying home due to increased fears of deportation.

“See right here at the Whataburger?” he asked. “And at the corner, what is this? Taco Bell? I saw some trucks, I don’t know. It was immigration or ICE.” Austin’s North Lamar neighborhood is home to a lot of strip malls, and the clientele is mostly Latino. I stopped in at a supermarket and taqueria called La Hacienda and asked manager Juan Rodriguez if business was down because people are afraid. Outside, he pointed to a couple of restaurants next door. In February, he saw trucks pull up and agents in uniform march into businesses.

What Rodriguez was describing was part of a five-day nationwide sweep. ICE officers arrested 51 people in the Austin area. More than half had no criminal history; they were just living in the country illegally.

Javier Bautista stopped for lunch at La Hacienda. He wore the white T-shirt and pants of a painter, and splatters on the clothes showed he’s been working. He said the big ICE raid put everyone on edge.

It’s a bit less risky for Bautista. He works in private homes, which are less likely to be raided. Those who work in restaurants or outdoor construction sites feel more exposed.

“A lot of friends told me they didn’t show up to work many times because they felt they were being monitored by immigration agents,” he said.

He said he’s noticed a lot of businesses have less foot traffic. And it’s not just Hispanic-owned ones like La Hacienda.

“In the past months, I would see businesses empty,” he said. “Wal-Mart was a little empty. HEB grocery was also empty.”

The Spin Cycle Coin Laundry next door is feeling the effect of that diminished foot traffic.

“What’s going on is that people are scared and don’t want to leave their homes,” said manager Marta Soto.

She said daytime business has dropped dramatically and thinks it’s due to rumors that ICE only works during the day. She is staying open until 1 a.m. to meet changing demand.

“Since they don’t want to come in the morning, they can at least come at night,” she said. “So we can stay open because we have to do business with them.”

It’s been several weeks without another major ICE raid in Austin. That has people venturing out a little bit more. But there’s a feeling there are more big roundups to come.