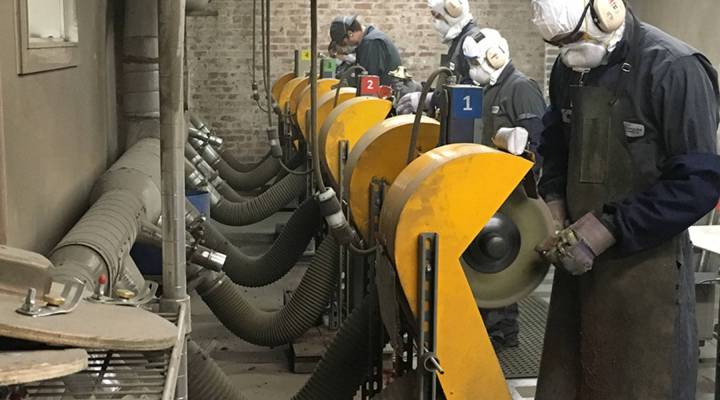 In the Marketplace-Edison Research Poll, 80 percent of respondents said they consider manufacturing jobs to be “very important” (43.5 percent) or “somewhat important” (36.1 percent) to the local economy where they live. Support for manufacturing jobs was relatively strong across all demographic groups and income brackets, receiving the strongest support from those making less than $25,000 a year, and those with only a high school education or some college but not a bachelor’s degree.

That view was mirrored among employees at Schoolhouse Electric & Supply, a custom-lighting manufacturer in Portland, Oregon.

“I’ve been a cook, a delivery driver, a union organizer, a construction worker, and now I work in manufacturing,” said Cyndy Chan, 46, who has worked in production at Schoolhouse for more than a year. She was laid off from construction in the economic downturn and feared losing her house.

She said her current job is rewarding — she likes working with her hands and seeing what she’s produced every day — and provides financial stability.

“This is a pretty decent wage, and I’ve gotten some raises. I can see working here till I retire.” A spokeswoman for Schoolhouse said production wages range from $13.00 an hour to $21.95 an hour. The company has 130 employees, three-quarters of them in manufacturing, and continues to expand and hire.

Schoolhouse Electric & Supply in Portland, Oregon, has grown to 130 employees in the past several years. The company manufactures custom lighting fixtures.

Mitchell Parrish, 25, has never worked in a factory and isn’t planning to — he has a liberal arts degree from Middlebury College and works as marketing director at Higher Ground Presents, a concert promotion company in Burlington, Vermont.

Parrish, who participated in Marketplace’s poll, shares Chan’s view that manufacturing is important to the local economy.

“Manufacturing is crucial for a lot of people looking for steady jobs, consistent income, benefits,” he said.

But Michael Strain, a labor economist at the American Enterprise Institute, said manufacturing isn’t as important as many people think.

“As a matter of economics, they’re wrong,” Strain said.

The Bureau of Labor Statistics reports that there were 12.4 million manufacturing jobs in the U.S. in March 2017, constituting 8.5 percent of total nonfarm payroll employment. The manufacturing sector represented 25 percent of employment in 1970. Manufacturing employment peaked at 19.5 million in 1979, and has fallen precipitously since 2000, when the sector still employed more than 17 million workers. In 2016, manufacturers shed 44,000 jobs, a decline of 0.3 percent; employment has rebounded so far in 2017, rising by 49,000 jobs.

“What’s important is that people have good jobs, where they can make a contribution and earn a good wage,” Strain said. “Health care jobs, education, firefighter or police officer —it’s not obvious to me that working in a factory is any more important.”

But Robert E. Scott, an economist at the Economic Policy Institute, said manufacturing jobs are indeed more important than many other jobs in terms of their overall economic impact.

“Not only do they have higher wages — especially for non-college-educated workers — than most jobs in other industries, but they also have great benefits,” Scott said.

In a 2015 report for EPI, Scott cites statistics to argue that manufacturing companies “punch above their weight” and generate significant economic activity (or gross output) beyond their direct contribution to gross domestic product.

“The wages paid, plus purchases of goods and services by manufacturing — it’s about 35 percent of total GDP, much bigger than any other private sector of the economy,” said Scott, referring to manufacturing’s gross output, a calculation that includes indirect economic activity generated by the sector. The Bureau of Economic Analysis reported manufacturing’s share of GDP at 11.7 percent in 2016. It contributed 23 percent of GDP in 1970.