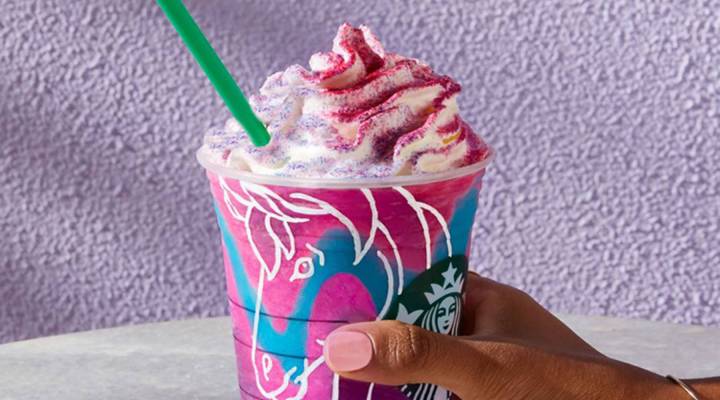 Unicorn frappuccinos: the limited-time-offer Starbucks drink that temporarily consumed the internet. But did you know the original inspiration, unicorn toast, came from the mind of health food blogger Adeline Waugh, and that it was, you know, healthy? Unicorn stuff, like mermaid toast and galaxy donuts, are just the latest iteration of Instagram-friendly foods that are shaping our food trends. But are they here to stay? Kimberly Egan is a partner at CCD Innovation, a strategic food and beverage development agency. She spoke with Marketplace guest host Adriene Hill about the unicorn food wave. The following is an edited transcript of their conversation.

Adriene Hill: When did this rainbow/unicorn trend start?

Kimberly Egan: It started with Adeline Waugh, who is a blogger. And she created a cream cheese toast colored with chlorophyll and beet root, which are very natural colorings. She called it unicorn toast, and then all of a sudden it just took off and morphed into this crazy confectionary place.

Hill: How do we go from a healthful piece of toast to a giant, pink sugar bomb from Starbucks?

Egan: Well, I think part of it is culturally driven. We’re calling it a unicorn trend but I actually would ladder it up to an escapism trend. Because the world is kind of a funny place right now. There is lots of uncertainty, and I think especially with the millennials — they are very much a driver to this trend — they want to escape. And this unicorn escapism is a wonderful way to do it.

Hill: Is this that different from a food trend like kale or bacon that preceded it, which seemed to stick with us for kind of a long time.

Egan: I would say that this is more of a fad than a trend. A fad tends to peak very early and then sort for drop off suddenly, whereas a trend builds over time, and what I think what it represents is this escapism trend. So what is also going on within this world is galaxy donuts and mermaid toast and —

Hill: Wait,  you gotta stop there and tell me what those things are. I’m not familiar with galaxy donuts or mermaid toast.

Egan: So, galaxy donuts are basically just doughnuts that have sort of dark icing on them, and they represent planets. And they are showing up in sort of these boutique doughnut shops around the country. And then mermaid toast is essentially a cream cheese toast but then colored in blues and greens, and it’s just another way to articulate this need for escape.

Hill: What prediction do you have for the next big food trend? Once we move beyond sort of rainbow colors and bright pinks and galaxy donuts, where are we going?

Hill: So next year we’ll be having a sort of insect infused “frappe” from Starbucks?

Egan: You may have some insect sprinkles on the top. I can guarantee you will be eating chips made from crickets.