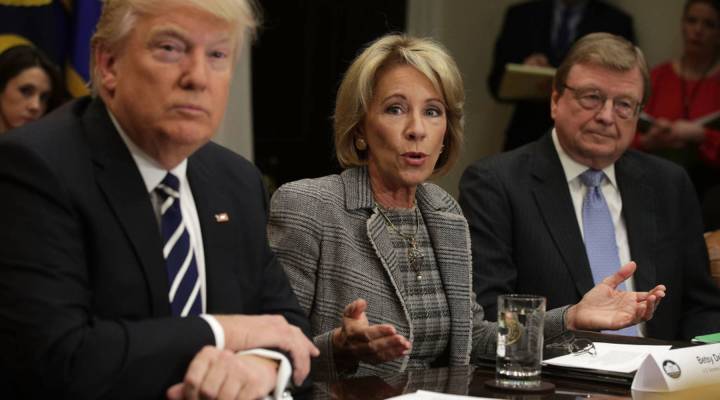 The U.S. Department of Education is one of the many agencies President Trump is looking to shrink. His administration is calling for a $9 billion — or 13 percent — cut to the Education Department’s $68 billion budget for the next fiscal year.

The reductions could mean trimming services, programs and jobs. But firing people is more complicated than just handing out pink slips. That’s why the Education Department recently spent more than $28,000 to receive training from Graduate School USA on how to downsize, according to a recent Politico story.

“It’s incredibly ironic,” said Donald Kettl, a public policy professor at the University of Maryland. “The bottom line is that there just is no easy or cheap way to reduce the size of government workforce.”

One of the reasons agencies need help, Kettl said, is because federal rules for downsizing are complicated. The rules are outlined in a 119-page document heavy with arcane rules and jargon. They include how agencies should identify employees they want to release, the way to notify them and employee rights in regards to appeals.

In Washington speak, this entire process is called “reduction in force.”

Kettl said there hasn’t been a government-wide reduction in force in more than a decade, which is why most agencies aren’t familiar with the process.

“Almost nobody has experience doing this on a large scale, so any mistake can get you bad publicity,” he added.

Ron Sanders, a former associate director of the U.S. Office of Personnel Management, said at the heart of the complex rules is this very simple idea: “Last person hired is the first person to go. And in many agencies, that has a disproportionate effect on women and minorities,” he said.

Many experts, like Max Stier, president of Partnership for Public Service, argue the rules need to be reviewed.

“We have a legacy system that was designed for a different age,” Stier said, adding that reduction rules should put a greater emphasis on employee performance. He also said that agencies should consider reductions in force only after they’ve figured out their priorities and resources.

“There is some focus on trying to reduce the head count in government before understanding what you’re trying to get done and then how best to do it,” Stier explained. “And I think that’s the wrong ordering.”