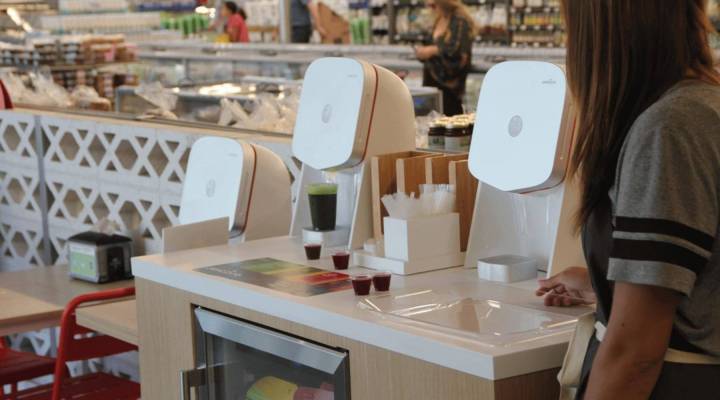 A Juicero press squeezes juice from Juicero-branded packages of produce. It connects to the internet, costs $399 and is not necessary for squeezing juice from Juicero-branded packages of produce. The company raised an estimated $120 million from venture capitalists. So when Bloomberg News posted a video showing the machine squeezing juice from a produce package next to a reporter squeezing a juice bag by hand, it caused a bit of a buzz. Marketplace host Kai Ryssdal talked with Bloomberg’s Ellen Huet about the squeeze test and what it says about Silicon Valley. The following is an edited transcript of their conversation.

Kai Ryssdal: So, where did this company come from? How did we get to the point where we’re, you know, paying $400 for a juicing machine?

Ellen Huet: So, it was actually $700 when the machine first launched, believe it or not. And then, once it came on the market, investors who tried it figured out actually you can squeeze the packs by hand, and you can get the same amount in basically the same amount of time, and some of them were pretty frustrated. We got a tip about it, checked it out ourselves and did a test in our own Bloomberg pantry, and we were so shocked. We were squeezing this juice packet, and we couldn’t believe how easy it was.

Ryssdal: So, what does it say then, about the state of venture capital in Silicon Valley today that this company got, like, $150 million in VC money for a thing that you can squeeze with your hands?

Huet: It was more like $120 million, which is still a lot of money. If you are a startup entrepreneur, I think you’re jealous of that at that amount of funding. I really think it just shows that people put money into ideas, and people and they don’t really know whether it’s going to work. The investors we talked to said they put money into Juicero before they ever saw a working prototype. They didn’t know what it was going to look like, and they trusted the entrepreneur. Maybe they made the wrong call or maybe not. Maybe the company will still be fine. They have a really impressive supply chain that gets fresh fruits and vegetables from farms into these packets to your home within, you know, just a few days, and that’s quite impressive. So I think there’s definitely still some value there. They just built this machine that, as it turns out, was really not needed.

Ryssdal: I wonder if maybe this entire episode makes folks who are not in venture capital, not in high-tech — that is to say, most of the rest of the population — look at Silicon Valley and go, “What is the matter with you?”

Huet: Yeah, you know, juice is something that already many people think is kind of unnecessary. There were a lot of anti-juice reactions to this.

Huet: Yeah, they say things like, “Oh, just eat a fruit, like an apple or something.” And yeah, it’s a lot of money for something many people think is unnecessary. It is kind of a First World problem. And, you know, maybe the people who were making fun of it weren’t the target market anyway. So we don’t really know how this might affect the company overall, but it may not be the end.

Ryssdal: Well, we should say, I mean, this certainly has raised company’s profile, and they’re fighting back.

Huet: Yeah. They fired back and said, “Here are the advantages of the juice system. It’s easy, you don’t have to go through the trouble of squeezing it by hand.” Some people found their response unconvincing, other people may have found it made a good point.

Ryssdal: Ellen Huet. She covers Silicon Valley and high-tech for Bloomberg, most recently on Juicero. Thanks a lot.