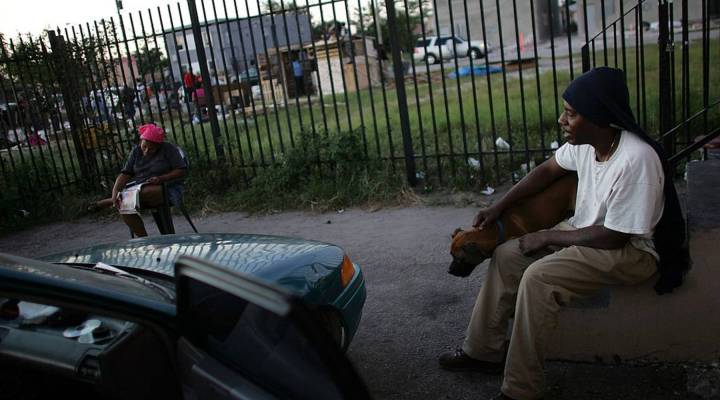 COPY
Kathy Region (L) and Jimmie Alvin with his dog, pimp, sit next to the shanty town going up next to their apartment complex in the Liberty City neighborhood in Miami, Florida.  Joe Raedle/Getty Images

Kathy Region (L) and Jimmie Alvin with his dog, pimp, sit next to the shanty town going up next to their apartment complex in the Liberty City neighborhood in Miami, Florida.  Joe Raedle/Getty Images
Listen Now

That’s the simple financial advice that Chester Herbert’s white associates gave him when they saw his upholstery business had potential to be even larger. There was one big problem with that, though.

“They weren’t giving bank loans to guys who looked like my father,” said Chester’s son, Bob Herbert, a senior fellow at the think tank Demos.

Discriminatory acts like the ones Chester Herbert faced as an African-American man have made it incredibly difficult for black people in the U.S. to enter the middle class or stay in it. Bob Herbert’s new documentary “Against All Odds: The Fight For a Black Middle Class,” which airs on the PBS World channel this Tuesday, looks at the specific practices that institutions have employed against black men and women. (You can watch the full documentary here.)

If you want to build wealth, a good job and that first family home are crucial, Herbert said. But African-Americans were historically barred from most good jobs until the latter part of the 20th century, and were prevented from attaining decent housing.

“African-Americans were shut out of the American dream,” he said.

Living in a home that isn’t yours

One type of prejudice African-Americans encountered in the housing market: contract buying.

A “contract purchase” was almost like buying the house on an installment plan, Herbert said.

You wouldn’t have ownership of the house until you paid off the whole thing. The practice ended up costing the black community up to $500 million over 30 years, reported the Chicago Tribune.

“These shady brokers would come along and you would get to move into the house, and then you would make monthly payments as if you were making a mortgage, but you wouldn’t build up any equity,” Herbert said. “If you defaulted on the loan at any point — let’s say you fell a month or a month and a half behind — then they could take take over the house, evict you and not give you any of your money back.”

Practices like these didn’t end in the 20th century. Herbert argued that the sub-prime loan crisis shared similarities with contract selling — and these sub-prime loan offers weren’t given by people you’d think of as shady brokers.

“Some of them were the biggest banks that we’re aware of in the country,” Herbert said. But they would offer subprime loans to African-Americans who were making, let’s say, $100,000 or more a year, he said. They were more likely to get subprime loans in some cases than white families with an income of $30,000 a year.

The problem with Social Security

Additionally, our social safety net, the Social Security system, was not set up to cover certain occupations that were filled predominantly by people of color.

When President Franklin D. Roosevelt passed Social Security back in the 1930s, he needed the support of Southern Democrats for this to get through Congress, Herbert said.

“They would not support it unless it excluded both farm workers and domestic workers,” he said. And many black people happened to hold those jobs.

“We point out in the film you could work for 40 years faithfully as a maid, do good work, finally retire. ” Herbert said. “But they made so little, they wouldn’t have any savings, no retirement fund and no Social Security. In essence, no money at all.”

Making it to the middle class

On the employment front, one of the possible paths to entering the middle class were government jobs.

“Most jobs for blacks were menial jobs and almost all black women who were working up until the mid 20th century were domestics maids or housekeepers,” he said. “So government jobs became incredibly important. You could be a teacher in black schools. You could be a sanitation worker. You could work in a post office and law enforcement and that sort of thing. And of course there were a lot of people who were self-employed who built businesses, which is what my family did.”

While he explored predatory practices in the documentary, Herbert clarified that he didn’t want to make it an “incredible downer and suggest that no one was doing well.”

“The impression that a lot of people have is that it’s ‘either-or.’ That it’s either the people who are making astonishing amounts of money, like your big movie stars or TV stars or athletes and that sort of thing, or you’re the people who are sort of stuck in the ghetto and you’re living in a neighborhood that’s crime ridden,” Herbert said. “And it’s not just that extreme. There is a large middle class. And one of the things we try to show in the film is how against all odds, so many African-Americans were able to establish a middle-class standard of living.”