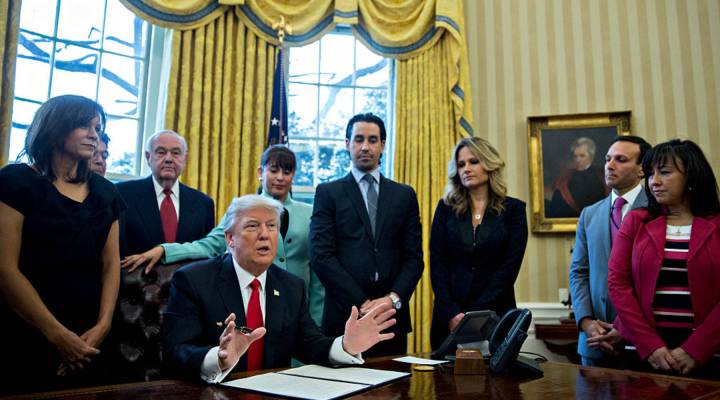 The latest Marketplace-Edison Research Poll asked Americans whether they thought the U.S. government should be run more like a business. We ask because President Trump on many occasions promised to do so and to bring his business acumen to bear on the presidency.

This is something Americans have argued over for more than 100 years.

“Business people, business-oriented people, they’ve got a different mindset for getting things done and how to get things done, and they go quickly to the problem and try to resolve it,” said Curtis Moore of Kingston, Tennessee.  Moore, himself a retired businessman, was among our poll respondents.

Republicans are more likely than Democrats to say the government should be run like a business — 78 percent to 32 percent. A majority of Americans over age 45 think it’s a good idea, those under 45, and women, tend to think it’s not.

“I mean, business shouldn’t have anything to do with families,” said poll respondent Debbie Bolton from Erlanger, Kentucky, referring to the role of government as caretaker and helper. “I think that puts us middle-class people in a bad spot.”

Robert Hayes, a respondent from Fayetteville, North Carolina, captured both sides of this American argument. On the one hand, he said, “government has a different mission than business. Business has a mission for making money, government has a mission to take care of the people and the nation.” But on the other hand, “there are many things that could be run more efficiently at less cost to the tax payer if it were run more like a business,” Hayes said.

How has president Trump done at keeping true to his promise?

“President Trump is doing what he can to act decisively,” said H.W. Brands, professor of history at the University of Texas at Austin. “And if there’s one thing most people have in mind in distinguishing the business world from the political world is that the CEO of a business can act decisively.”

Trump has asked his son-in-law to head up the Office of American Innovation to revamp the federal bureaucracy, but it’s way too early to say how that’s going. So far, the president’s most decisive moments have come when he signs executive actions — orders, proclamations, memoranda.

“A lot of these that you read have not been able to make large policy changes,” said Sharece Thrower, assistant professor of political science at Vanderbilt. “They order agencies to look into policy change, and even the big ones, like immigration orders, we’ve seen the courts step in.”

Where courts haven’t been a problem for Trump, Congress has. One of Trump’s signature promises was health care reform. So far, he’s been unable to convince the legislature to go along.

“One thing that’s unique to the Trump presidency is maybe his lack of anticipation of some of these constraints,” Thrower said.

“As soon as he needs to address alternate centers of power in the Congress and the judiciary, he’s failed,” Winograd said. “Partially because he’s never had to take into account those kinds of alternative power centers in decision-making in a business.”

Trump’s most famous line before the presidency may well have been “you’re fired!” But he can’t fire Paul Ryan or a judge that blocks his orders.

“I think,” Winograd said, “he’s learning how unlike a business government is.”