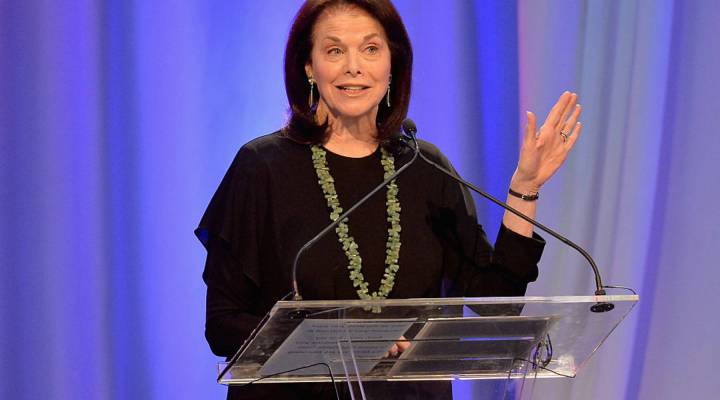 Sherry Lansing on the next ‘chapter’ of her career

Sherry Lansing on the next ‘chapter’ of her career

Negotiations between the Writers Guild of America and television and movie production companies are in recess today as the union counts membership votes on whether to authorize a strike. Watching with not-quite-detached interest is Sherry Lansing, the former CEO of Paramount Pictures.

When Lansing came to Los Angeles in the mid-1960s to become an actress, she initially found more work teaching English and math than on the screen. Eventually though, she found a career behind the camera as a producer, then a studio executive and then running Paramount Pictures. Lansing is the subject of “Leading Lady,” a new biography written by Stephen Galloway. She talked with Marketplace host Kai Ryssdal about her varied career in the movie business and how the industry has changed. The following is an edited transcript of their conversation.

Kai Ryssdal: What was Paramount Pictures like when you took over in 1992?

Sherry Lansing: Well, when I took over, there had been an absence of a lot of films. So, for want of a better word, the cupboard was kind of bare, and the most important thing was to find movies. Because no matter what the responsibilities of the job are, no matter how much you have to worry about the parking lot and the commissary and all the bureaucracies of running a studio, your success is simply determined by whether the movies succeed.

Ryssdal: The list of movies that you either greenlighted at Paramount or were involved with as a producer, is extraordinary. “Forrest Gump,” “Braveheart,” “Titanic,” “Fatal Attraction,” “Private Ryan.” Did you know? For instance, when you came out of the test screening?

Lansing: So, first of all, that’s very kind of you, and I want to say that I certainly did not do this alone. There was a team of people I worked with who I’m very grateful to, and I also want to say that the filmmakers deserve all the credit. Did I know? There’s not a movie that I greenlit that I didn’t think would be a huge hit. So let’s start with that. I believed in every movie. And I also want to say, I worked just as hard on the movies that failed as I worked on movies that succeeded.

Ryssdal: Does that gut you? That must get you to see a movie fail.

Lansing: I tell you, you can’t get out of bed in the morning. I always felt that I let the filmmakers down, that it was my fault. And it was my fault, because I felt that the studio has a responsibility to open the picture. That opening weekend is our marketing. And there were just times where I was depressed for days. And then, you cannot wallow in this. You have to pick yourself up, and you have to try again.

Ryssdal: And especially in this industry, right? Because it’s not your best work, it’s your last work.

Lansing: That’s correct. And that drives me crazy. Everyone should be judged on their best work. So, you ask the question, did I know when the test screenings were great? I certainly had high hopes. But then again, you have to sell it to the public. So, there are pictures that had phenomenal test screenings, and the audience didn’t come. The one that comes to my mind is “Searching for Bobby Fischer.” I loved that movie. I think we released it twice. And they never came. There were other pictures where the test scores aren’t that good, but you can sell them. And they do a lot of business. So it’s not just the movie, unfortunately. And that’s how I think the business has changed so much since I first got into it and since I was a kid.

Ryssdal: Since you brought us up to now and today, and acknowledging that you’ve been out of the industry for 10 or 12 years now, what do you make of the changes in — I apologize for this word — “content production?” I mean, television now is the place to be, and movies, well, there are like three movies every year, and they’re all huge tent poles and that’s about it.

Lansing: So, I think it’s a thrilling time to be in the business. And even though I left the movie business literally 11 years ago, I am still a huge fan. And when I say movies, I just mean entertainment. To me, it doesn’t make any difference whether it’s in the local theater or whether it’s on my iPad or whether it’s on my television. I’m talking about content. So, when I was growing up, if you didn’t have a studio give you the money to make your movie, you couldn’t do it. I say to young filmmakers today, “You have an iPhone. Go make your movie.” You don’t need a lot of money. Go make your movie, put it on YouTube, put it on the web, it’ll get found.

Ryssdal: There’s a question I ask people who have moved on from that thing on which they built their career, but I kind of can’t ask it of you, because there’s a line in the book that says that when you left, you were burned out. And you were upfront about that and you were done. And now, you have clearly found your passion in your foundation in philanthropy.

Lansing: I always knew that my goal would be to start a foundation and to give back. And I think for me after, oh, I don’t know, 30 years in the business, I think I was burnt out. The passion, which is the most important thing I had, was kind of moving to something else. And so, for me, it was moving to cancer research, because I lost my mother to cancer. It was moving to education, because I’m a former math and English teacher. But I did love my time in the movie business, I want to be clear about that. I just — it’s about chapters. I mean, life is about chapters. It’s about rewiring not retiring. So, I feel very grateful and very blessed.

Ryssdal: Sherry Lansing, thanks very much.