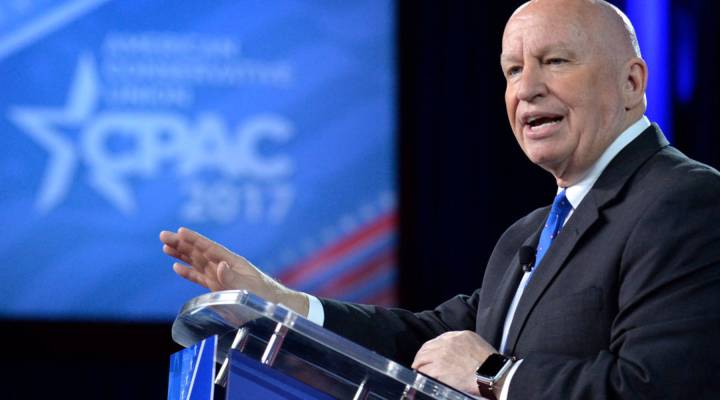 COPY
"We bounce back from recessions like no other country does. But not this last time," said Rep. Kevin Brady, chairman of the House Ways and Means Committee. MIKE THEILER/AFP/Getty Images

"We bounce back from recessions like no other country does. But not this last time," said Rep. Kevin Brady, chairman of the House Ways and Means Committee. MIKE THEILER/AFP/Getty Images
Listen Now

For this week at least, shove the GOP health care plan to the back of your mind. Come Friday night, the government is facing a shutdown should it fail to pass a bill to fund itself. And on Wednesday, the president is scheduled to announce his plan for tax reform. Rep. Kevin Brady, a Republican from Texas, is the chairman of the House Ways and Means Committee. Marketplace host Kai Ryssdal spoke with Brady about the coming week. The following is an edited transcript of their interview.

Kai Ryssdal: So the Wall Street Journal reports today that you and the rest of the tax leadership in the Congress are going to the White House to meet with Secretary Mnuchin and the head of the National Economic Council Gary Cohn tomorrow. Is that happening?

Kevin Brady: Yeah, it is. I think it’s pretty important. I think one of the key elements for tax reform this year, which is really the first time in 30 years we’ve had this opportunity, is for the White House, the House and the Senate to get on the same page, especially on the big issues, the big principles, that go with tax reform.

Ryssdal: What’s on the table, then?

Brady: Well, so look: We’re in the House. In my discussions with President Trump is a, “Look, we recognize this happens once in a generation.” And the code we’ve got today is so costly and complex, and it’s just broken. And so we’re trying to design a tax code built for growth that leapfrogs America into the top three best places on the planet for that next new job or plant. So we’re proposing, and I think the president will, as well, the lowest tax rates on our job creators, whether they’re local businesses, small businesses or major ones, in history. A tax code so fair and simple, most Americans will be able file using a postcard system. And then I’m hopeful the president joins with us in busting up the IRS. We think we need a new agency for the 21st century.

Ryssdal: Come on, a postcard? Seriously?

Brady: Yeah, for about 9 out of 10 Americans, we’ve designed a system that is that fair and that simple. It flattens the brackets out to just three. About 95 percent of Americans will be able to file using that simple an approach.

Brady: Yeah, I think for us to make sure this is revenue neutral, counting on economic growth, by the way, which lets us go much bolder in tax reform. So on the business side, you know, I think we can get close to 15 or certainly at 20, and which makes us very, very competitive worldwide. We can also stop taxing our American businesses worldwide, and we can make sure that all products are tax equal in the U.S. You do that, that leapfrogs us to the top three. And again with the families as well. You can’t keep those hundreds and hundreds and hundreds of special provisions for some and lower tax rates for everybody. So you’ve got to be willing to trade off some of those provisions to make sure you’re really giving people a lot more, and businesses a lot more control of what they earn.

Ryssdal: Yes, but let’s be clear on the growth thing, sir, because Secretary Mnuchin said this again today, he said these tax cuts are going to pay for themselves with growth. I think that’s what you’re saying, but you’re betting on the come, right, because we haven’t had the kind of growth you all are talking about in years.

Brady: Well, regrettably, under the past president, you know, we averaged less than 2 percent growth, which is half of what we’ve been doing as a country, and certainly a lot less than we normally do. We bounce back from recessions like no other country does. But not this last time. So we’re counting, not on our own projections, but on an independent source, the Joint Committee on Taxation, [to] really lay out what kind of growth we’ll see. Tax Foundation, [an] independent group, estimates under the House tax reform plan, our economy will grow by over 9 percent. And more importantly, our wages by nearly 8 percent. So those are good, strong, achievable numbers.

Ryssdal: Those are extraordinary numbers. Let me ask you, sir, about timing. You have said, and you just said it a minute or two ago, it’s a generational thing to do tax reform the way you are talking about doing it. Why are you squeezing it in, then, according to the White House’s timetable?

Brady: Well, I think it’s important to get it done this year. Our economy really continues to struggle. I know the unemployment rate is down, but, boy, we’ve left millions of people out of jobs. Young people just leaving school can’t find jobs. A lot of people [have] just given up.

Ryssdal: Let me make sure I heard you: We’re going to get this done this year. That’s what you’re saying.

Ryssdal: All right, is it going to be a bipartisan plan? We had Jason Furman, who, as you know, is President Obama’s economic adviser. He was on the program a couple of weeks ago saying, listen, this has to be bipartisan to get it to stick. Do you buy that?

Brady: Well, I would like to see it bipartisan. I mean, that’s the best way to do tax reform. But, I don’t know. We’ve engaged Democrats, invited them to bring us their tax reform ideas. I think they’ve got some good ones, but they’re in a pretty tough place right now. They’re really pretty obsessed against President Trump. So I’d love to see them come to the table. That’s the best way to do things. But if they decide to obstruct, I think using that budget process that allows a simple majority in the Senate may be the way it has to be done.

Ryssdal: Let me ask you one more thing, sir, and then I’ll let you go: Is the government still going to be in business Saturday morning, or are you all going to shut it down?

Brady: Yeah, I think it will be. Look, I don’t think there’s any issues at can’t be resolved. Unless Democrats are really ready to shut this government down — I don’t believe Republicans are.

Ryssdal: Well, you say Democrats being ready to shut it down, but last time I checked, Republicans control the Congress and the White House, sir.

Brady: Kai, as you know, the Senate takes 60 votes to pass these budget agreements. That means 8 Democrats at least have to support it. And so, in the Senate, there has to be a bipartisan deal. And so the question will really be, well, you know, what will Democrats insist upon in order to vote yes to keep the government open? And I don’t know yet. I think they’re all over the road.