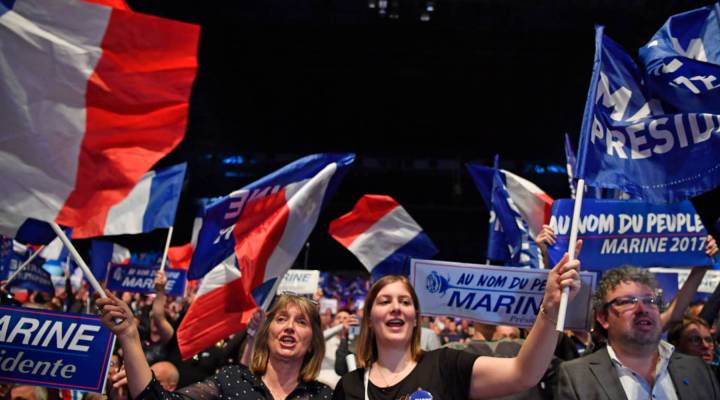 “We reject the global village, we reject this world without borders. We reject the big banks and the power of money that have subjugated France. We don’t want France to disappear.” Those are the words of David Berton, a 25-year-old student lawyer and an activist with the youth wing of the far-right National Front party.

More young people support the National Front than any other party, and one of the main reasons is the appeal of the Front’s anti-globalization and protectionist policies, said author Alexandre Devecchio.

“The young people today in France are more protectionist than their parents because they are the main victims of globalization” he told Marketplace. In his recently published book “The New Children of the Century – a Fractured Generation,” Devecchio argues that youth unemployment of 25 percent and huge job insecurity have turned many young French people off the whole idea of free trade.

“For the young, globalization means closing factories, moving them abroad. De-industrialization. It’s not a positive thing,” he said.

Many of Marine Le Pen’s most ardent supporters, young and old alike, come from what has been called “peripheral France.” These are the towns and villages outside the big metropolitan cities, places that feel left behind —“flyover states,” if you like. Le Pen is offering them what she calls “intelligent protectionism” and “economic patriotism.”

That could mean higher taxes on imports and foreign workers, more border controls, preferential treatment for French firms and possibly withdrawing from the European Union. In other words, an end to globalization in France.

“A disaster,” said Pierre Gellie, young entrepreneur who runs his small electronics startup in a tiny, cramped workshop in the center of Paris and who is clearly not a National Front enthusiast.

“Eighty percent of our sales will soon be abroad. It’s vital for us to be present on the international market. Protectionism makes no sense for France,” he said.

Gellie’s company , LYTID, is commercializing a new type of laser with medical and industrial applications, and he said without full access to overseas markets, his company cannot succeed.

“Protectionism — and certainly pulling out of Europe — could endanger a lot of businesses like mine. We would not be able to develop or even to continue,” he said.

Marine Le Pen is not expected to win the second round of the elections on May 7, so the protectionism of Pierre Gellie’s nightmares may well not materialize. But it might. And that possibility is enough to make this one of the most economically critical elections in recent French history.