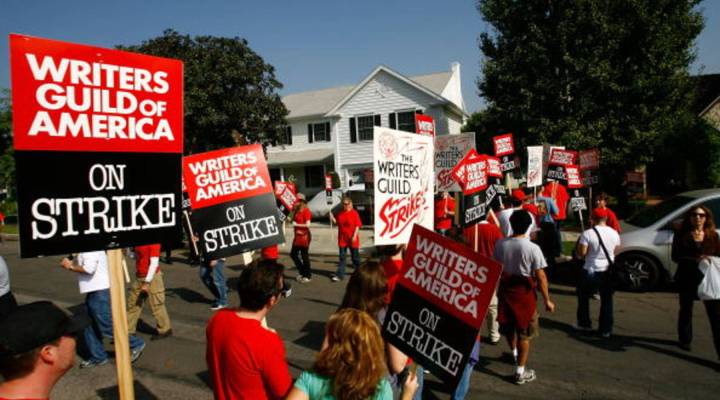 COPY
The last writers strike that ended in 2008 took 100 days to resolve. It's considered a foregone conclusion that most of the 12,000 or so Guild members will authorize a strike this time around if a new deal isn't reached. David McNew/Getty Images

The last writers strike that ended in 2008 took 100 days to resolve. It's considered a foregone conclusion that most of the 12,000 or so Guild members will authorize a strike this time around if a new deal isn't reached. David McNew/Getty Images
Listen Now

TV and movie writers are worried about the future as their payments go down while the studios’ profits go up. Their union, the Writers Guild of America, is in the process of negotiating their new contract; their current contract expires May 1. The Guild is asking members to give authorization for a potential strike. Here’s some background on the situation:

It seems like there are more TV shows than ever. Why are writers unhappy?

Paradoxically, as the number of shows has increased, writers say their earnings have decreased 23 percent in the last two years.

The central problem is that TV seasons keep getting shorter. While a season used to have more than 20 episodes, today there may be 10 or fewer. But writers get paid per episode. At the same time, episodes now have much higher production values and take longer to produce.

“So whereas I would write 22 episodes and it would take me a year, I have a show on Amazon now where I’m writing eight episodes, and it’s going to take me nearly a year, and I’m going to paid eight episodic fees for that,” said Chris Keyser, executive producer of “Tyrant” and co-chair of the writer’s negotiating committee.

Script fees for shows not on the broadcast networks, like CBS and NBC, are also much lower.

“The formulas by which we are paid on platforms other broadcast — that’s basic cable or streaming services — are only a fraction of what they are on broadcast,” Keyser said.

Two other big problems for writers: Shows rarely make it to syndication, once a lucrative source of revenue, and writers complain that they’re locked into exclusive contracts during production seasons that last as long as the ones that generated 20 or more episodes.

What are writers key demands?

What is the studios’ argument?

The studios are not talking, preferring to cede the public relations war to the writers; the Alliance of Motion Picture and Television Producers, the alliance representing studios at the negotiating table, did not respond to Marketplace’s request for comment.

What are the chances of a strike happening?

No one knows for sure, of course, but both sides seem dug in, and at least one observer said they’re far apart on the issues.

Jonathan Handel, an entertainment lawyer who’s covering the negotiations for The Hollywood Reporter, calculates that there’s a $350 million gap between the Guild and the studios.

“The frustrating thing is what the writers are looking for is about three times what the studios are willing to pay,” Handel said. “That’s not how a deal gets done.”

Keyser, of the writers negotiating committee, said the Guild feels emboldened because unlike in some previous strikes, the studios are making record profits. The Guild has repeatedly reminded its members that media companies made $51 billion last year, according to the Guild’s calculations.

“The companies can afford to make this deal,” Keyser said. “There’s really no reason why, in this era of big company profits, writers should be suffering.”

While the studios have the power and the deep pockets to withstand a long impasse, things aren’t as rosy for them as the writers make them out to be, said Miranda Banks, who wrote a history of the Writers Guild.

“There’s a real sense of concern about the future of film for the studios,” Banks said. “Audiences are shifting, and there’s less people in the U.S. watching broadcast television.”

The writers are also more cohesive than they have been during previous labor disputes, which would sometimes pit TV and film writers against each other, according to Banks.

“Nowadays, writers — whether you’re writing for film or television or streaming media — there’s a lot more of a sense that it’s all the same the content,” Banks said. “Writing is writing, and there’s a sense of unity within the organization.”

Where do talks stand?

The two sides ended talks Monday and agreed to resume negotiations on April 25, giving them less than a week to reach a deal before the writers’ contract ends on May 1. Online voting for a strike authorization runs through Monday. It’s considered a foregone conclusion that most of the 12,000 or so Guild members will authorize a strike.

Was the last writers strike a success?

It depends whom you ask. The last writers strike that ended in 2008 took 100 days to resolve. Late-night shows went dark, sitcoms and dramas had shorter seasons, and networks aired a lot more reality TV.

Many writers had well-paying development and production deals torn up.

“The writers have probably never recouped the wages they lost by going on strike,” Handel said.

The ripple effects on everyone from caterers to costumers cost California’s economy more than $2 billion, according to the Milken Institute.

The Guild said the strike was important because it allowed them to gain their first toehold into digital rights. It also unified writers from the East and West coasts.

Bert Royal, who has been a film and TV writer for nearly 20 years, gets visibly emotional talking about the last walkout, which he said nearly bankrupt him. But he said he wouldn’t hesitate to do it again.

“We’re all hopeful, but from what you hear around town, it’s very possible,” Royal said. “It’s going to be really tough. I hope it doesn’t do me in. The last one nearly did.”