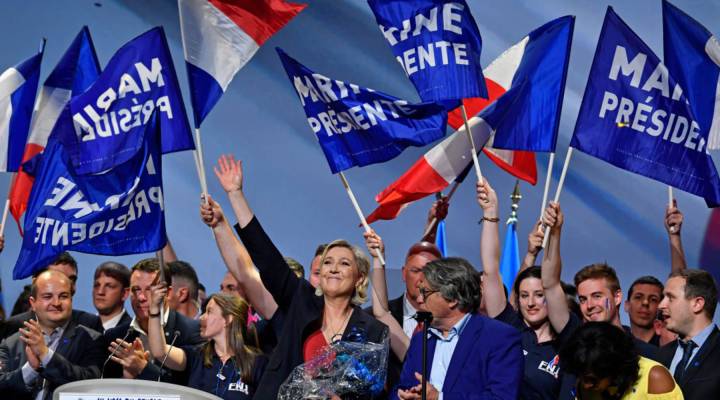 COPY
One of the most unpredictable French elections is being closely fought, with National Front leader Marine Le Pen promising to protect the electorate from globalization. Jeff J Mitchell/Getty Images

One of the most unpredictable French elections is being closely fought, with National Front leader Marine Le Pen promising to protect the electorate from globalization. Jeff J Mitchell/Getty Images
Listen Now

“On est chez nous!” The phrase, which means “this is our home,” thunders around a sports stadium in northeastern Paris. Some 6,000 supporters of the far-right National Front party are in full cry at a campaign rally as they await the arrival of their heroine, the leader of their party and a front-runner in France’s presidential election, Marine Le Pen.

“On est chez nous” is a battle cry for the National Front and conveys two connected messages: “We have too many immigrants coming to France” and “We don’t like the European Union running our country.”

Jean Cautirot, who was at the Paris rally, said he and his fellow party members resent Europe’s passport-free zone because it facilitates the influx of more migrants, which France does not want and cannot afford. Cautirot detests any EU involvement in French domestic affairs.

“I’m in favor of Europe so long as we just work together, but I’m against a European dictatorship. We don’t need to be ordered about by Brussels. The majority of French people don’t want that. We are perfectly able to govern ourselves,” he said.

Marine Le Pen has pledged that if she wins, she will immediately pull out of the passport-free zone and renegotiate a much looser relationship with the EU. Then she’ll hold a referendum on whether France should leave the single currency and perhaps the bloc as well. Jean-Paul Martin, a retired art gallery manager and Front supporter, knows already how he would vote.

“I would vote for Frexit, absolutely, absolutely,” he told Marketplace. “I think we do not take any benefit from the European Union.”

That will surprise many Brits, who for many years harbored the suspicion that the EU was set up mainly for the benefit of the French in order to contain the economic powerhouse next door, Germany. The euro was a French idea. But there’s little doubt that today many French people are disillusioned with the EU and with the euro.

“With the euro, our purchasing power has gone down,” said Danielle Oger, a Front voter. “I feel it, and other French people feel it for sure,”

She’s right. When the single currency was launched more than 15 years ago, French and German consumers had roughly equal purchasing power; today, the Germans are 17 percent better off. Analysts point out the discrepancy is mainly due to France’s failure to reform, but many French people blame the euro, and it shows in the opinion polls. Last year, a major survey by the Pew Research Center revealed that the French are less positive about the EU than even the Brits. And the Brits have voted to leave.

Karim Amellal, a Franco-Algerian writer and entrepreneur, said the French have clearly fallen out of love with Europe.

“In France, people don’t believe the European Union can solve their problems anymore,” he said. Problems like an unemployment rate of 10 percent, which is twice the rate of other major economies, like Germany, the U.K. and the U.S. But Amellal, who’s pro-EU and anti-National Front, does not believe the French would ever vote to leave the Union.

“It’s obvious that the cost and the economic disruption would be huge. And I think when people think about that, they will realize that leaving the single currency and the EU is not the answer,” he said.

Amellal is reassured that an EU referendum is unlikely in France because, as the polls indicate, Le Pen may get through the first round of the election on Sunday, but she will probably not win the second round, and therefore will not be the next president of France. But no one can be sure of the outcome of this highly unpredictable election or its longer-term repercussions. It has already stoked up some powerful nationalist sentiment in a key member state of the European Union. At Le Pen’s rally in Paris this week, the crowd sang the National Anthem three times — in the middleof her speech.