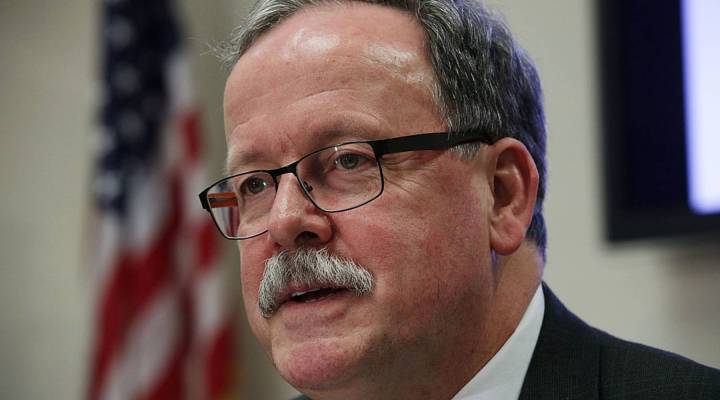 COPY
"We understand our role is to be nonpartisan and to be objective," says Keith Hall, director of the Congressional Budget Office. "You don't want the economic data to be partisan." Alex Wong/Getty Images

"We understand our role is to be nonpartisan and to be objective," says Keith Hall, director of the Congressional Budget Office. "You don't want the economic data to be partisan." Alex Wong/Getty Images
Listen Now

This has been a relatively low-key week in Washington. Congress has been on recess and the president has been in and out of town. Left behind have been staffers at agencies and offices that do the work that helps the government work, among them the Congressional Budget Office and its director, Keith Hall. Hall and the CBO were most recently in the news during the debate and eventual collapse of the health care bill.

Kai Ryssdal spoke with Hall about keeping analysis nonpartisan, the politicization of data and why reputation is everything for the CBO. Below is an edited transcript of their conversation.

Kai Ryssdal: Congress comes back to town next week. Health care is going to be on the agenda, as you know. What’s your state of mind? Are you dreading them coming back or is it just another day at the office?

Keith Hall: Well, it’s kind of another day at the office. You know, health care is getting a lot of attention right now, but we work on a wide variety of topics. One of the things I’d like to point out is, lately there’s all this attention on this one cost estimate on health care. Last year we produced 676 cost estimates. And we’ll produce that many this year, so it’s a lot of topics and a lot of estimates.

Ryssdal: Does it make you crazy, though, when you all wind up in the spotlight to the exclusion of all else you do, and it becomes so intensely partisan?

Hall: No, we work in a partisan world. We’re nonpartisan folks in a partisan world. We’re kind of used to that. Almost everything we produce get some attention. You google us any particular day, you’ll find some reference to something we’ve done. One of the biggest challenges always for us is, once you do sometimes some pretty sophisticated work, you now have to write it in English so it can be used. And that’s a real challenge.

Ryssdal: Well, do you think, actually, that that challenge is part of why you wind up being so politicized? That you have to take what is intensely complicated stuff and make it legible and understandable to laypeople and members of Congress and their staffs?

Hall: Actually, I think that’s a big part of why we’ve been able to have a pretty strong reputation of credibility and an un-biasness. And we do a lot of talking to experts and getting their views on things and getting them to actually review our analytical reports when we can.

Ryssdal: OK, but wait, aren’t you guys the experts?

Hall: Well, we are, and we’re trying to multiply ourselves, in a sense. We can’t be complete experts in everything. We actually spend quite a lot of time talking to experts and talking to agencies and talking to state governments, et cetera.

Ryssdal: You’ve been around as a government economist for a lot of years. I mean a lot of years. You don’t go back to the beginning of the CBO, but you were in town probably when it was started. Do you think it is fulfilling its mandate today?

Hall: Oh, absolutely, absolutely. You know, one of the things that I remind myself of a little bit is we have this really important role, and we get a lot of focus as if we’re sort of constraining Congress. Well, we are what Congress wants us to be. Congress created us 40 years ago to be independent, objective and nonpartisan, and we’re still that way today because that’s what they want.

Ryssdal: Do you think Congress actually wants that? Because you can’t turn around without the CBO getting beat up by members of Congress.

Hall: That’s OK. I mean, we get support from the right people. When I get pressure, I don’t get pressure over what we’ve done. I get pressure over, “Can you guys hurry it up? We need a vote.” They work at a different pace than we do sometimes. In this latest health care thing, we held things up because it takes time for our due diligence. And that’s what we get pressure on really is the timing of stuff, not that that we don’t do it right.

Ryssdal: Do you ever get the feeling that you’re kind of shouting into a hurricane, that there’s so much going on out there that the predictions in the report you guys do get lost until something becomes the political thing of the day.?

Hall: There might there might be an element of that. You know, one of the things I worry about with staff who’ve been here a long time is they can work sometimes very, very hard, and it can be something like health care. We had our health care team working day and night, through weekends, and we want them to feel like they’re having an impact and they’re not just, as you say, shouting into a hurricane.

Ryssdal: Well you have to admit, you guys had an impact in the health care debate. I mean when you came out and that number was 24 million people without insurance, everybody just went, “Oh well, this bill’s done.”

Hall: Well, that may or may not be true.

Ryssdal: We should say that you’re a Republican. You are a conservative economist. You have been for your entire life here. How do you keep this organization going down the middle of the road?

Ryssdal: Well, no, you don’t. But since you brought it up, let me ask you what you think of the president of the United States and his thoughts during the campaign about BLS and how the numbers are fake and all of the politicization that he did to an organization you used to run.

Hall: People can use your data and say whatever they want about it. The best you can do is try to make sure that they understand the reality of how it really works. What it really says. So that’s what you hope for. You can’t control how people use your data, use your analysis.

Ryssdal: So if you had your druthers, bearing in mind that you’ve been a senior-level government economist for a very long time now, is there a way to get nonpartisan economic analysis more broadly accepted, or is it just a fact of life that what comes out of this office is going to get batted around by Congress to political ends?

Hall: I hope so. You know, there’s an element of branding. We want to keep our reputation very strong. We want to be credible. If we don’t have a good reputation, we are not valuable to them. Some people sometimes just don’t believe the data. And I do get worried that the average American doesn’t know what to believe anymore. And that’s a problem. And so that’s where I think the branding and the reputation winds up being so important.

Check out our full interview with Hall below: