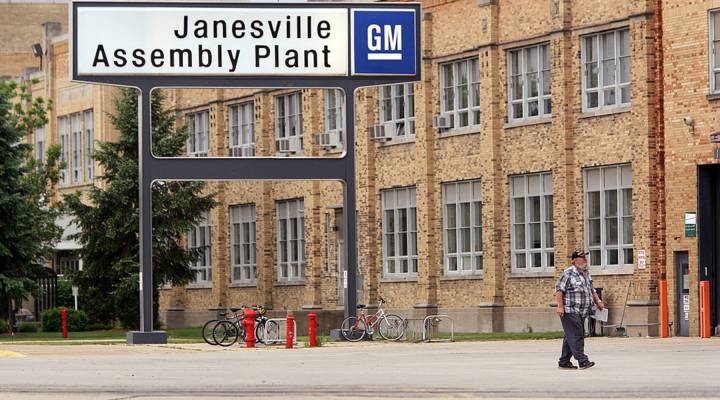 COPY
“I wanted to tell the story of a perfectly ordinary place that had lost a slew of jobs in the Great Recession,” said author Amy Goldstein. Scott Olson/Getty Images

“I wanted to tell the story of a perfectly ordinary place that had lost a slew of jobs in the Great Recession,” said author Amy Goldstein. Scott Olson/Getty Images
Listen Now

You probably know this story: During the financial crisis of 2008, the U.S. auto industry nearly collapses. Then the government gives General Motors and Chrysler bailouts, which keeps the industry afloat. It sounds like it could be a happy ending, except that for some people, the damage was already done. Factories closed, and well-paying jobs that allowed people to live comfortably went away. Janesville, Wisconsin, the hometown of House Speaker Paul Ryan, was also once the site of a GM factory. When the it closed in 2009, the auto supply jobs surrounding the factory went with it. Amy Goldstein, staff writer at The Washington Post, went to Janesville to report on the closing and its aftermath, which became her book, “Janesville: An American Story.” Marketplace host Kai Ryssdal spoke with Goldstein about the town. The following is an edited transcript of their interview.

Kai Ryssdal: Other than the hometown of Speaker of the House Paul Ryan, Janesville is not on the American economic map. How did you wind up there?

Amy Goldstein: Well, I wanted to tell the story of a perfectly ordinary place that had lost a slew of jobs in the Great Recession. It was also a place that, unlike a lot of communities that lost work during this recession, had never been part of the Rust Belt. It hadn’t been losing industrial jobs for decades. And that appealed to me, because I wanted to tell the story of what this recession did to people and to communities.

Ryssdal: And that gets to the economic throughline of the book, which is: Now what do we do?

Goldstein: Exactly. So this community is pretty resourceful, and there’s been a big economic development effort. And there also was an effort in the community just to figure out all kinds of ways to help families that had lost their work. So, for instance, the social studies teacher at one of the high schools created something called the Parker Closet at Parker High School, which is just a little locked room where kids who needed help could come and find used jeans or toiletries or prom dresses at prom season. I mean, these were just individual efforts at being resilient, at trying to prop people back up when they needed help that they never needed before.

Ryssdal: Do you suppose that the political leaders in and around Janesville — instead of Wisconsin, I’m talking specifically about Speaker Ryan and Gov. Scott Walker — do they understand how the economic lives of a lot of these GM workers, and, in fact, the whole town, has changed? That they don’t feel a part of the American economy really anymore?

Goldstein: Well, I’ve interviewed Speaker Ryan, and, you know, one of the things that he says, both about his hometown and nationally, is that there really needs to be a layer between the government and the individual of philanthropy, local philanthropy. People being generous to their neighbors. And Janesville has that generosity. It’s just that the need is really big now. So there’s a question of whether all this generosity can generate the resources that the people need.

Ryssdal: Well, what do you think? You spent years reporting this book. What’s your gut?

Goldstein: Well, I think that people have been trying very hard. But I spent time, for instance, at this small free clinic right downtown in Janesville. And during the years that I was there, this clinic was not having enough money raised. It was trying really hard, but it was cutting back on how many people it could accept. I mean, that was not something the clinic wanted to do, but it had no choice. Similarly, there is a little food pantry in town that tries really hard. And during this time, it was having to cut back on how many people it could admit every day. The first 40 people in line could get food. So people began lining up very early in the morning, and I spent mornings there trying to figure out who was No. 41 in line, who’d be the first person turned away.

Goldstein: Well actually, there is hope in Janesville, and that’s one of the things that really struck me, because it’s got very strong economic development leadership that is, to this day, trying to bring new businesses to town. That’s had a little bit of success. There’s a Dollar General distribution center that’s going to be bringing several hundred jobs, so that’s kind of big news and important news. But it’ll be paying 15 or 16 dollars an hour, not the $28 an hour that General Motors did. But if you walk around Janesville, it’s not a place that’s depressed. I mean, people are very much still trying.