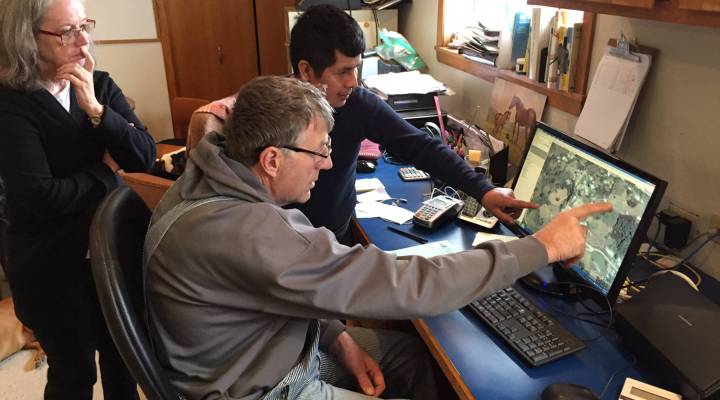 COPY
Wisconsin farmer John Rosenow looks at a Google Earth rendering of the area in Veracruz, Mexico, that many of the workers at his dairy farm call home. With him are Roberto, a worker, and Shaun Duvall, a local Spanish teacher. Annie Baxter/Marketplace

Wisconsin farmer John Rosenow looks at a Google Earth rendering of the area in Veracruz, Mexico, that many of the workers at his dairy farm call home. With him are Roberto, a worker, and Shaun Duvall, a local Spanish teacher. Annie Baxter/Marketplace
Listen Now

In the late 1990s, John Rosenow was expanding his dairy in Cochrane, Wisconsin. He struggled to find workers to fill positions on the farm as he went from milking 50 cows to more than 500. Other farmers had turned to immigrant labor from Mexico. Rosenow wasn’t interested.

“Diversity for us was whether you were Polish or Norwegian or you were Catholic or Protestant,” he said. “And so to bring somebody in from a different country, who spoke a different language — boy that’s something we just didn’t want to do.”

But eventually he ran out of options. Rosenow called a farm labor staffing service in Texas, which sent him a worker from Mexico.

“Great worker,” Rosenow said. “Milked cows 10 hours a day, seven days a week. Didn’t take a day off. And I thought, ‘Wow! Somebody that actually works as hard as I do.’”

From there, Rosenow kept hiring more guys from Mexico, mostly from the coastal Veracruz region. He estimates that the workers send about half of the roughly $35,000 they make each year back to their families in Mexico. Many Mexican immigrants send some of their U.S. earnings home. Those remittances to Mexico hit a record $27 billion last year, according to the Mexican central bank.

Some U.S. legislators want to tax those remittances to help finance President Trump’s plans for a border wall. But for Rosenow, those remittances are less a political football and more a point of pride. He’s seen first hand how they’ve helped his workers’ families, as he has now traveled to Mexico nine times as part of an effort to better understand the language and culture of his workers.

The visits came about because Rosenow and other farmers hiring Mexican immigrants encountered language barriers early on. They brought the problem to an agricultural extension agent, who found them a local Spanish teacher, Shaun Duvall. She started teaching English to the workers and Spanish to their bosses.

Wisconsin farmer John Rosenow visits with the family of one of his workers in Astacinga, Veracruz, in rural Mexico.

Duvall came to see language wasn’t the only problem: there were cultural disconnects. For example, the Mexican workers felt slighted because the farmers didn’t greet them as the workday started, asking after their families.

“And so employees might think, ‘Well, geez. He’s really cold,’ because in their culture, that’s what you do,” Duvall said. “And the dairy farmers would say, ‘Well, geez. Why should I do that? I never did to anybody here.”

Duvall knew people learn language and culture best through immersion. So she took some farmers to Mexico in 2001. Duvall said the poverty in rural areas opened the farmers’ eyes.

“There weren’t any phones. There were no banks, no post office, no anything like that,” she said. “I remember many of them saying, ‘Whoa! This is just like our country before we had rural electrification.'”

“I realized that, like, this is a once-in-a-lifetime experience. It’s something everyone should do — they should experience a different culture, a different language,” he said. “I told Shaun after that that I’m going to be sure this thing doesn’t die.”

For the next trip to Mexico, Rosenow had an idea: He wanted to visit the workers’ hometowns. He started getting to know the life left behind by workers like Roberto, who has worked on Rosenow’s farm for two years. We agreed to use just his first name to protect his privacy.

“It’s nice in Mexico,” Roberto said. “Only for some reason, it doesn’t pay down there. You work all day and you have no money.”

Roberto said back home he’d earn about a quarter as much as he does on Rosenow’s farm. With the money he and others remit, family back home have replaced wood homes that are susceptible to termites with sturdy cement and brick houses.

“They started making houses out of better materials, and we found our houses would last longer,” Roberto said.

Businesses have cropped up, including a bakery and a cell phone store opened by some of Rosenow’s former employees. And it’s now possible to travel between towns on paved roads.

Rosenow said it’s rewarding to know his workers’ wages have made these improvements possible. He’s trying to facilitate more development by offering entrepreneurship classes to his workers so they can launch successful businesses back home.

But his visits to Mexico also benefit his farm: He’s built trust with his workers by learning more about them.

Rosenow pulled up a picture on his iPad of Roberto’s family, including his wife and three kids, who still live in Mexico. Roberto is not in the picture, but Rosenow is. Roberto said it’s meaningful to him and his family that Rosenow has taken the time to get to know them.

“My family is grateful,” he said. “A good boss is like a second father.”