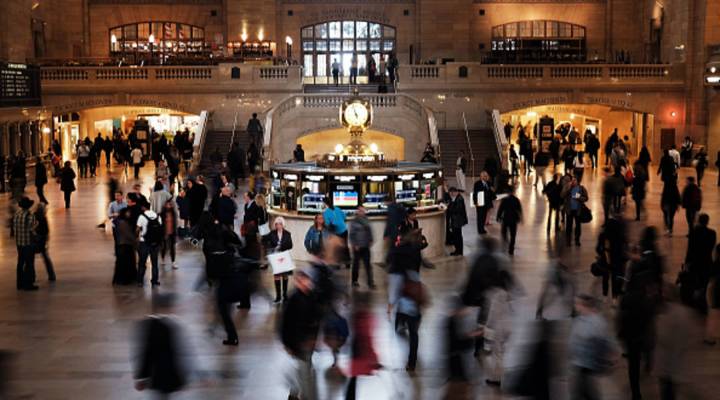 COPY
High rents aren’t big enough to explain why Americans are much less mobile geographically than they were in the past, said Abigail Wozniak, associate professor of economics at Notre Dame. Spencer Platt/Getty Images

High rents aren’t big enough to explain why Americans are much less mobile geographically than they were in the past, said Abigail Wozniak, associate professor of economics at Notre Dame. Spencer Platt/Getty Images
Listen Now

For hundreds of years, Americans have moved for work. The gold rush, the Great Migration, the pioneers, even the colonists.

“That was one of the ways to get ahead in this country,” said Daniel Shoag, associate professor at Harvard’s Kennedy School. You move to a new place or a new job, you find better wages or more opportunities.

The thing is, Americans don’t appear to be moving around as much as they once did.

“Americans are much less mobile geographically than they were in the past,” said Samuel Schulhofer-Wohl, senior economist at the Federal Reserve Bank of Chicago. “In the early ’90s, about 3 percent of Americans moved between states every year, now it’s about one and a half percent.”

Why? That’s a big question in economic research right now. Schulhofer-Wohl argues we don’t move as much because there’s simply not as much in it for us as there once was.

“The benefits of moving have gotten smaller relative to what they were in the past. If you look across the country at the differences in the types of jobs that are available and what you could get paid for doing a given job, those differences have gone down over time,” he said.

He is agnostic for now about whether this is a good or a bad thing and what the causes might be.

But Harvard’s Shoag said there are worrying reasons about why it may be less beneficial to move.

“The places that offer higher incomes have gotten really expensive,” Shoag said. “Those gaps in housing prices have gotten a lot larger relative to the gains in income than they used to be. It used to be that a place that offered you 1 percent higher wages offered you slightly less than 1 percent higher housing costs, and now that relationship has more than doubled.”

Regulations, zoning rules and housing shortages have driven up rents in many high-growth areas. That affects low-income Americans the most.

“People with a college education are still moving to the higher-income parts of the country, and people without are moving away,” Shoag said. “That’s something that increases inequality, limits opportunity.”

But this decline in people moving geographically may just be part of something much, much bigger. It could be an extension of the fact that “it’s just not as easy to change jobs or employment situations as it used to be,” said Abigail Wozniak, associate professor of economics at Notre Dame.

Forget about changing jobs by moving; we just don’t change jobs as much (or employment status) as we used to. By Wozniak’s measures, what she calls labor fluidity has declined 10 to 15 percent since the late 1970s and early 1980s. She argues that’s why we aren’t moving for a new job as often.

“Think of all the people you know. They took a job, and they said ‘I’m gonna do this for two or three years and then I’m gonna change.’ And it’s five or 10 years later,” Wozniak said. “Or they left the labor force and they said, ‘I’m gonna come back in a couple years.’ And then they don’t.”

This is just as much a worry for economists as not moving is, Wozniak said: “A major source of wage growth is changing employers, moving between employment situations.”

Wozniak said high rents aren’t big enough to explain how widespread and long term this trend is. And she said it’s not that we are all drastically happier with our jobs than we used to be. Wozniak has analyzed inequality, demographic change, labor market tightness, changes in compensation.  Nothing seems to explain it.

“I wish I had a single clear answer,” she said.

Wozniak and her colleagues have noticed one thing, however, that’s changed at the same time as labor fluidity.

“There’s been a very pronounced decline in measures of social trust in the U.S. since the 1970s,” she said.

If you ask people if they think strangers are trustworthy, fewer people think so today than did 30 or 40 years ago. Maybe we just don’t trust one another enough to hire new people or apply to work in new places as much.

It’s purely speculative at this point. Why we aren’t moving and changing jobs as much remains unsettled economics for now.