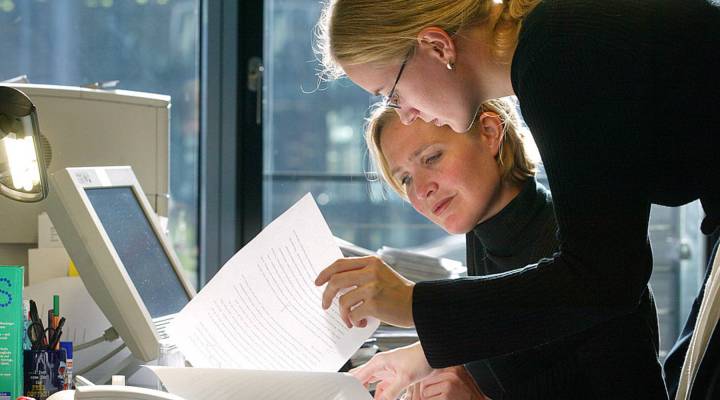 “I frequently hear comparisons of family incomes in 1980 and today. But I don’t think this is an apples-to-apples comparison. I remember that in the early ’80s, it was a big story that women were joining the workforce.” Skrocke asks how the increase in women earners can be squared with widespread income stagnation in recent decades.

According to Elise Gould at the Economic Policy Institute, the three decades after World War II were good for most American families.

“From 1947 to 1979, you saw broad-based income growth. From the lowest-fifth up to the top 5 percent of income, there was relatively strong growth across the board.”

But from the late 1970s on, growth in median family income slowed down. It increased just 23 percent from 1980 to 2015, and growth wasn’t distributed very evenly.

And as family income disparity has increased, the middle class has been hollowed out, said Rakesh Kochhar of the Pew Research Center, citing a recent report.

Starting in the 1970s, said economist Heidi Hartmann, president of the Institute for Women’s Policy Research, “we saw gains in income for the families where women were working. They worked anywhere from 700 to 1,000 more hours per year on average.”

Many men, meanwhile, have experienced a deterioration in earning power and labor demand in recent decades.

“At the middle, the median man hasn’t gained in real earnings since the late 1970s,” Hartmann said. “Middle-class family incomes wouldn’t have grown at all during the period if it had not been for women’s work.”

Hartmann said the greatest financial benefit of having two earners has accrued to families that have higher earning power, education and job skills to begin with.

“The middle-income mothers, and especially the high-income mothers, could work more and contribute more to family income. That’s because for them, the child care costs are affordable,” she said.

So to answer listener Skrocke’s question: Most of the increase in median family income since 1980 (84 percent, according to analysis by Gould of the Economic Policy Institute) is due not to wages rising for individual workers, but rather to more family members — especially women — going to work and working more hours to earn a paycheck.