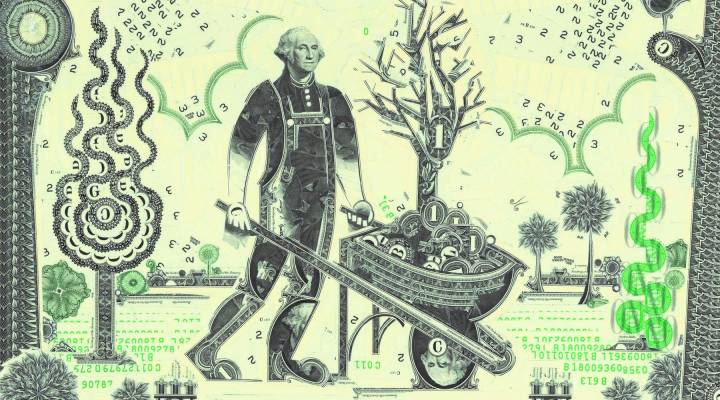 A dollar bill is just a piece of paper. But as everyone knows, money is powerful. New York-based contemporary artist Mark Wagner believes in the emotional power of money. He makes intricate collages with actual U.S. currency. He has used deconstructed dollar bills to make portraits of presidents, recreations of famous paintings and other collages. Marketplace host Kai Ryssdal talked with Mark Wagner about his artwork. The following is and edited transcript of their conversation.

Kai Ryssdal: Why money as a medium for you?

Mark Wagner: I’d been doing collage out of a whole bunch of different materials, and initially, I wanted a piece of paper that was just super common — something that everyone could recognize. There’s a power behind taking something that’s familiar to everyone and making it into something completely new.

Ryssdal: Yeah. And in some cases, just looking through your catalog, they’re not entirely recognizable. It takes you second sometimes to go, “Oh! That’s money.”

Wagner: Yeah. At the shows, I find people pulling dollars out of their wallet a lot and trying to match up pieces with things that they were familiar with.

Ryssdal: And it’s all a single dollar bills right? You don’t you’re not into fives and tens and twenties.

Wagner: It’s maybe 95 percent single dollar bills at this point. I do mix in fives, some tens and then I use some foreign currency every once in a while. But it’s the repetition that I can get from the one, and the fact that the one hasn’t been redesigned. If you look at a $1 bill, it’s got lots of nice pretty parts on it, leaves and stuff that’s been taken out of the fives and the tens.

Ryssdal: The logical question that comes to mind is, boy this must get expensive. I mean, you’re cutting up money and using it that way.

A portrait of Ben Bernanke.

Ryssdal: There is something about money, right, that has an emotion to it. It has — spirituality is too much, but you know what I mean. What reaction do you get when people realize in galleries that it’s money?

Wagner: You know, you would think so, but it’s actually cheaper than a lot of other materials. Oil paints are not cheap. You know, a tube of cadmium red for, like, a little 1 ounce tube will put you back like 20 bucks, 30 bucks. And I use almost all of the bill, and there’s almost no overlap on the pieces. So, even a big piece, even like a piece the size of a door, might only have, like, $250 on it.

Ryssdal: What reaction do you get when people realize in galleries that it’s money?

Wagner: A bunch of different reactions, but primarily it’s positive. Like, I think a lot of people sort of enjoy vicariously that I’m cutting up this thing that they themselves worry about, you know, that I worry about. I think there’s certainly a taboo behind destroying money, even a taboo behind disrespecting it or wasting it. But I think, I think a lot of people are kind of, like, happy to see it.

Wagner: Yes. Yes there is. And everybody brings that up. Any time I see my stuff referred to online, there’s always, like, a roll call of nannies and hall monitors complaining about it being illegal. When people ask me that, I like to say, “Should it be illegal?”

Ryssdal: Has the Secret Service come calling yet?

Wagner: No. They haven’t. And actually, I’ve got some work in the collection of the Federal Reserve.

Ryssdal: Oh, no come on, seriously? That’s, like, too meta.

Wagner: Oh, yeah, they have it. They’ve got currency collage in their collection. And a couple of years ago there was a portrait of Ben Bernanke that I did that was on display at the National Portrait Gallery in D.C. And I think that’s only like two blocks from FBI headquarters.

Ryssdal: Mark Wagner is an artist that works primarily, I guess you’d say, in American currency we’ll put a link to some of his stuff on our website it’s marketplace.org. Mark thanks very much.