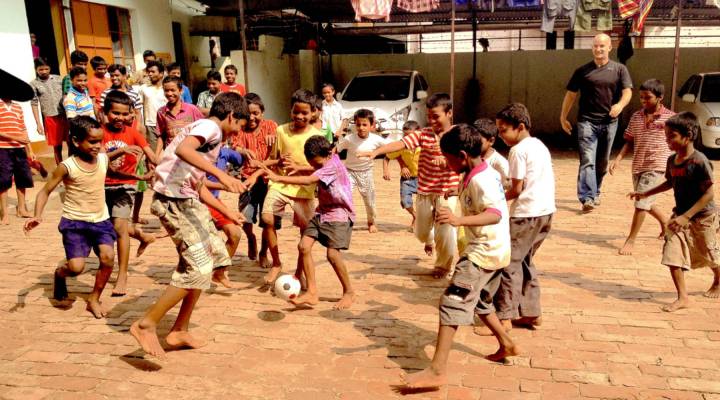 An often-heard story on Wall Street is that of the financier who leaves it all for a quieter life, maybe living on a few acres of farmland on Long Island, in search of inner peace.

But a stockbroker from London left out the quieter life part and decided to travel the world on a yellow motorcycle, without any money or prepared accommodations. He instead chose to rely solely on the kindness of others.

Leon Logothetis chronicles his experience around the world in a reality TV series on Netflix called “The Kindness Diaries.”

He stopped by to discuss why he left it all, some of the places he’s traveled and whether his ability to travel so freely was due to his privilege. Below is an edited transcript.

Ben-Achour: On your show, you say most people view the world from a distance and that that world changes when you get up close. What do you mean by up close?

Logothetis: The news, I believe, puts a magnifying glass on all the negative things that go on in the world. It doesn’t mean that negative things don’t happen. They do. But what about if we were to put a magnifying glass on all the good things that happen? And I believe that there are so many good things. There are people with so much compassion. There are people with empathy. And more often than not, you go out into the world and you find these people.

The Colosseum in Turkey.

Ben-Achour: What prompted you to do this, to put yourself at the mercy of total strangers all around the world?

Logothetis: You know, I used to be a broker in the city of London. On the outside, I had pretty much everything I needed. On the inside, I had pretty much nothing. I was emotionally and spiritually bankrupt, and I didn’t want to live my life like that. And I stumbled across the movie “The Motorcycle Diaries,” which is a romanticized version of Che Guevara traveling around South America relying on the kindness of strangers. I ended up quitting my job, and I ended up traveling around the world and really trying to connect with people.

Ben-Achour: Some might say your gender allows you to have had this carefree experience and to be able to open yourself up to the kindness that you saw. I think some women might see your ability to run around and put your fate in the hands of strangers as a privilege of your gender, maybe even your race. You are white. What do you think?

Logothetis: I think that would be a very valid point. It would be much harder had I been a lady. It would probably be much harder if I wasn’t white. But that doesn’t mean that it’s not possible. There are many people that I’ve met on my travels who are not white and who are not men. And they managed to do equally wonderful and beautiful things.

Logothetis at Angkor Wat in Cambodia.

Ben-Achour: You came from finance. You didn’t feel so great when you were doing it. Do you think that there’s something about the finance industry that could benefit from a little bit more empathy?