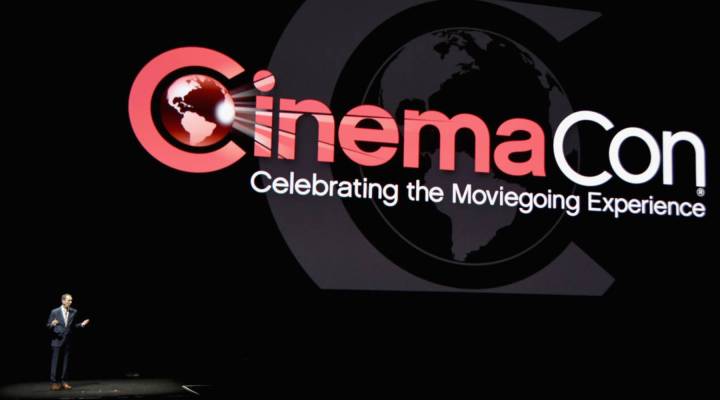 The major movie studios are showing off their upcoming films this week in Las Vegas at an event called CinemaCon. They’re trying to get theater owners to book and promote their movies. But there’s this tricky issue in the last few years over when to make movies available to the at-home audience. Marketplace’s Adriene Hill attended CinemaCon and gave Molly Wood an update. Below is an edited transcript of their conversation.

Molly Wood: All right. So I am a cheapskate with a big TV. Talk to me about this back and forth between studios and the theater. What look do they both want?

Adriene Hill: I mean, they want money. Right now there’s this 90-day window between big movies coming out in the theaters and when they actually make it to you and your television screen. Studios want to shorten that time to basically allow people to pay a premium for being able to watch a movie at home much, much sooner. And the idea is they could get more people watching and paying to watch more money for their movies. As you might imagine, this makes the theater owners crazy because they need people in seats. This is not a new conversation, but there does seem to be finally a growing consensus that something has got to give here. You know, we watch in different ways we watch on different devices. There’s a billion things to watch. And I think that it sounds like from the outside that the studios and theaters are really trying to come up with a plan that will work and change things.

Wood: So did you hear anything any specifics that you were able to uncover there?

Hill: You know, no. We know the studios and exhibitors are talking to each other, but they’re not doing too much talking to the press or in public. There are reports of the current discussions are sort of focusing around a month, maybe a month and a half. So shrinking that window. But we’ll see. This is hard. It’s contentious, and it’s not just studios and theaters who disagree. It seems like some of the filmmakers too. Yesterday at Warner Brothers did their studio presentation and an exec got up and talked about “Yes, we need to change this. We’re figuring it out, how to grow the pie for everybody.” And then minutes later in the exact same presentation, Christopher Nolan basically threw cold water on the idea like, “My movies are for theaters. I love theaters.” So we’re going to see if we can find a deal that works here for everybody.

Wood: So OK, real quickly, let’s get to the fun part. Any favorites?

Hill: I’m going to give away something about myself. “Fast and Furious” is always a favorite. I’m excited for the “Fast and Furious.” Knowing you, Molly, I’m going to go with the new “Blade Runner.” It also looks pretty cool. I have to imagine it’s up your alley. You know, Hollywood is making escapist fare right now. Everyone is talking about escaping real life, sitting down in the dark, getting away from it all, being transported to another place. And that’s really what this industry, especially right now, is about. And I have to admit it, it sounds, it actually is — because I do have the coolest beat ever — pretty nice.

Wood: Alright, I’m game for some escapism. I might even pay to go to the theater. All right. Thanks, Adrienne.