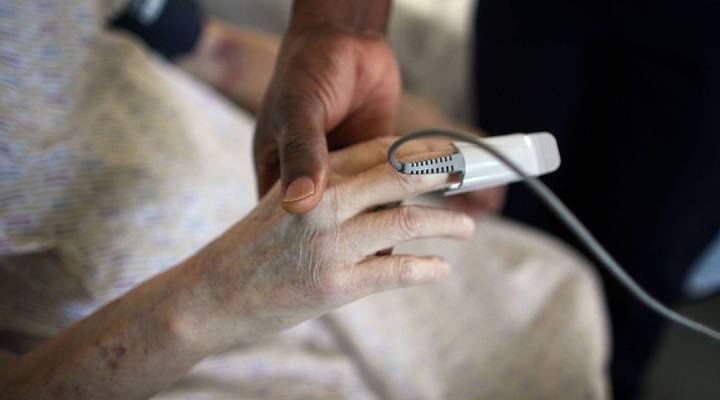 COPY
"The impetus for a lot of my work is that machines can see the world and can see patients in ways that we cannot as doctors," Dr. Ziad Obermeyer says. Christopher Furlong/Getty Images

"The impetus for a lot of my work is that machines can see the world and can see patients in ways that we cannot as doctors," Dr. Ziad Obermeyer says. Christopher Furlong/Getty Images
Listen Now

We’ve heard it before: learning machines, or artificial intelligence, is going to change the tech industry. These smart algorithms are going to take incredibly huge data sets and come up with incredible things to do with them. But what happens when those data sets are our bodies, and the incredible things they predict are our deaths? Turns out, in health care, this isn’t a scary thing. Dr. Ziad Obermeyer is an emergency room doctor at Brigham and Women’s Hospital in Boston, an assistant professor at Harvard Medical School and a researcher who studies how machine learning can help doctors treat patients with serious illnesses. Marketplace guest host Molly Wood interviewed Obermeyer about his work; below is an edited transcript of their conversation.

Molly Wood: So back at the beginning of your research, you were an ER doctor. You saw that it was difficult for doctors to tell patients that they might die, but do you feel like this was a communication problem or a prognostication problem?

Ziad Obermeyer: Yeah. I mean, I think there are a lot of people working on the communication side. In other words, how doctors should bring up the subject of death and dying to patients. I think that the prerequisite for that is that the doctors actually need to know about it beforehand. And there’s a lot of research suggesting that doctors are just not very good at predicting death. That’s, I think, the impetus for a lot of my work is that machines can see the world and can see patients in ways that we cannot as doctors and can start helping us with some of these difficult predictions that we would like to make in our clinical practice but just don’t have the ability to.

Obermeyer: Yeah, I think there are some direct the benefits to patients. There are a lot of surveys that have been done of people who are living with serious illnesses that are life-limiting. And one thing that those patients really, really want and aren’t getting from doctors is objective predictions about how long they have to live. Doctors are very reluctant to answer those kinds of questions, partly because, you know, you don’t want to be wrong about something so important. But also partly because there’s a sense that patients don’t want to know. And in fact, that turns out not to be true when you actually ask the patients. People do want to know because it helps them to put their affairs in order, both kind of logistically and emotionally, and make all the arrangements that need to be made.

Wood: In the article you co-authored for the New England Journal of Medicine, you wrote that AI, or the machine learning, could disrupt the health care industry, especially imaging and radiology. Will machine learning be for radiologists what automation was, or is, for manufacturing?

Obermeyer: I think there are very big changes coming to medicine, and I think it’s going to have a lot of implications, first for the kinds of doctors that are, in essence, translating things from digital pictures to digital reports, because that translation can now increasingly be done by a machine. And so I think increasingly over the next 10 to 20 years, we’re going to see a lot of that work being displaced by machines. There’s always going to be a place for humans. In other words, we still have pilots flying planes even though we have autopilot. But I think it’s going to change the industry quite a bit as those technologies come online.

Wood: How much longer do you think it’s going to be before one of these machines can predict a relatively healthy person’s death?

Obermeyer: I think it’s all part of the same algorithm, and I think we, for example, use a lot of the data from the Harvard hospital systems. Those data cover a lot of young patients, just as well as old patients. And the algorithm performs just as well across all age groups, genders, races. And so when you have that data and you have a well-measured outcome like death, predicting anyone’s likelihood of death in the next year is pretty easy.

Wood: Would you want to know?

Obermeyer: I think so. Yeah, I think so. I think it’s a little scary, but it’s hard to turn down knowledge when you’re given the option of knowing.

Wood: Ziad Obermeyer, thank you so much.