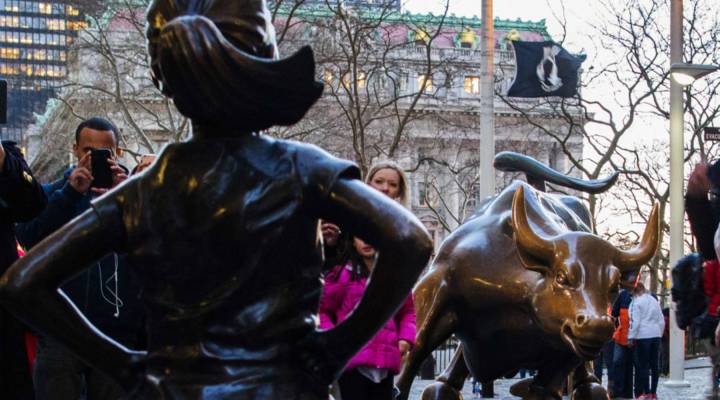 The faceoff between the Wall Street bull and the “Fearless Girl” will continue.

The 4-foot-tall, pony-tailed statue of a girl with arms akimbo was supposed to be removed on April 2, but New York city officials announced on Sunday that it was extending its stay through February of next year.

“In her short time here, the ‘Fearless Girl’ has fueled powerful conversations about women in leadership and inspired so many,” New York City Mayor Bill de Blasio said in a statement. “Now, she’ll be asserting herself and affirming her strength even after her temporary permit expires — a fitting path for a girl who refuses to quit.”

The new permit will be issued under the Department of Transportation’s art program.

The statue appeared opposite the bull statue ahead of the International Woman’s Day. It was commissioned by State Street Global Advisors and sculpted by Kristen Visbal. The “Fearless Girl” was an immediate hit, with tourists and New Yorkers alike lining up to take photos joining the girl in her standoff with the bull.

Not everyone is thrilled with this decision, including Arturo Di Modica.

Di Modica, the artist behind the bull, has threatened to sue for copyright infringement if the statue is not removed by April 2, according to reports from the New York Post.

Similarly to the “Fearless Girl,” the bull appeared out of the blue in front of the New York Stock Exchange in December 1989. The similarities end there, according to Di Modica. His statue was a gift to the city, to lift the city’s spirits after the 1987 stock-market crash. It has remained there for nearly three decades watching over Wall Street, becoming a symbol for the U.S. financial markets. The “Fearless Girl” is shtick, he told Marketwatch.

State Street Global Advisors said that the statue is a symbol of female empowerment.

“Today, we are calling on companies to take concrete steps to increase gender diversity on their boards and have issued clear guidance to help them begin to take action,” said Ron O’Hanley, president and CEO of State Street Global Advisors, the day the “Fearless Girl” first faced off with the bull.