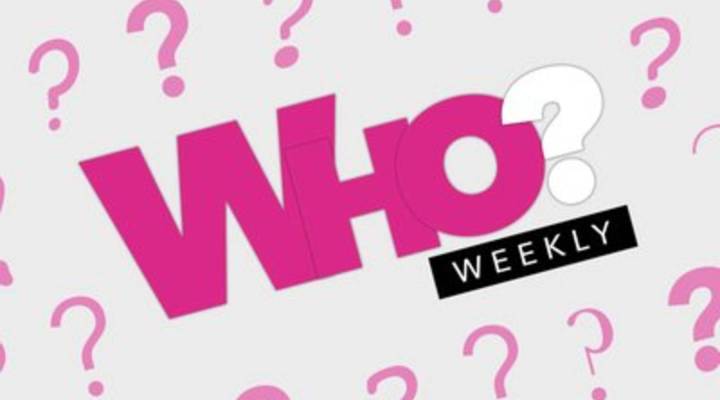 COPY
Who? Weekly
The Marketplace Quiz

No matter who you are, you’ve probably had a rough day at the office that changed your perspective, or maybe you made an impulse purchase you really, really wish you could take back. This week, Bobby Finger and Lindsey Weber, the hosts of the pop culture podcast “Who? Weekly,” took our money-inspired personality questionnaire. (You can listen to “Who? Weekly” here, or wherever you download your podcasts.)

“A ‘who’ is a celebrity that you see everywhere, you hear their name all the time, but you’re unsure of who they are and what their job is,” Bobby Finger said. “You know they’re famous in some regard, but you’re not exactly sure why.”

Below is an edited transcript of our conversation.

What is something that you’ve bought you now completely you regret buying?

But my big idea was that I was going to take it to a tailor and have it fitted to my body. Here’s the problem, here’s why regret it: I got it, and now I’m absolutely petrified of going to the tailor and, like a baby, putting on this jumpsuit, saying, “Can you fit this to my body?”

Lindsey Weber: So you just have this jumpsuit at your house and you’re never going to wear it?

Finger: It’s a “Tell-Tale Heart” in my closet.

Weber: Like when you come home every night you just you feel it. You feel that it’s there.

Finger: And it’s only been two or three nights. It’s the dumbest thing I’ve ever bought.

Lindsey, what is the hardest part about being a “who” that nobody knows?

Weber: Name recognition. The hardest part of being a “who” that no one knows is you have to tell people who you are all the time. I think assuming people know who you are is a very tough line to cross. And if you assume that people know who you are, you’re in trouble, but then if you introduce yourself, it’s embarrassing. So like the whole introduction spiel, you know, where you’re, like, “Oh, nice to meet you, I’m Julianne Hough,” and you’re like “Yeah, I know who you are.” But most people don’t know who you are! So that’s probably difficult, you know?

What is something everyone should own, no matter the cost?

Weber: It has to be an actual cost, not like an emotional cost.

Finger: OK, Lindsey, I know. It’s like, existential Marketplace. OK. I feel like I’m being very practical here. No. 1 is something that I have not yet bought myself but will in the future, because I keep realizing that it’s worth it. One: A new bed, a good bed, spending a lot of money on a bed.

Finger: The mattress, expensive. A cast-iron pan? Pretty cheap. You can cook so many things in cast-iron pans, and if it gets rusty [or] gets dirty, guess what? You clean it off. They’re, like, indestructible. You’ll take them with you forever.

Finger: No. 3: These are the stupidest answers, I’m so sorry.

Weber: Yet you have three of them.

Finger: No. 3 is a Spotify subscription, a streaming music subscription. When I hear ads on it, I’m ,like, “Come on.” It’s such a small price to pay to get rid of ads, and you use it all the time. I can’t really think of other things that are as essential, that I use every single day. Which is why I bring up cast-iron pans, streaming music and a mattress.

What advice do you wish people had given “whos” before they began their careers?

Weber: The more and more I read about “whos” and I pay attention to their whereabouts and the industry that they work in, the more and more I realize how important it is to have a good publicist. If you see somebody everywhere and the kind of press that they’re getting is something that you like, find out who their publicist is. This cannot be that hard.

It’s like when Celine Dion loved what Zendaya was wearing and said to whoever in her sphere, “Who was dressing her?” and someone said this guy La Roche (this is one of the judges on America’s Next Top Model if you don’t know who we’re talking about.) Point being, literally a month later, Celine Dion is the best-dressed person in Hollywood. She’s all in fashion. She’s at the fashion show, she’s on every list. All it took was for her to say “I like this thing. I want it.” And I know a lot of celebrities can do that, but I mean as a “who” starting out, your publicist can take you very far.

I don’t have a publicist, so I don’t really know how that works, but I can imagine that it’s not that hard to find yourself one that is good.

Weber: But also, I mean, as somebody who also works in pop culture stuff, you and I both get some of the worst press releases we’ve ever seen. They’re not in English. I mean not like they’re in another language, like, nothing’s spelled right. It’s confusing, there’s no call to action as to what I can do to even be involved in this. Some people are just not smart. They don’t know your name. There’s a few very small things you can do to be a good publicist, and I think the top 5 percent are the only ones doing it.

Finger: And it’s probably worth the money.