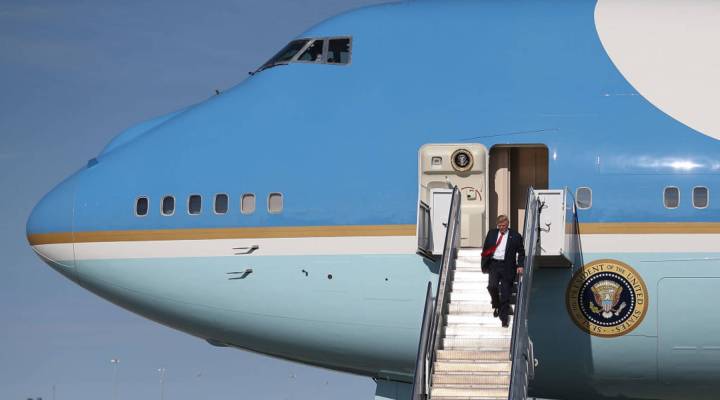 President Donald Trump walks down the stairs after arriving on Air Force One at the Palm Beach International Airport to spend part of the weekend at Mar-a-Lago resort on February 17, 2017 in West Palm Beach, Florida. Joe Raedle/Getty Images
Make Me Smart With Kai and Molly

President Donald Trump walks down the stairs after arriving on Air Force One at the Palm Beach International Airport to spend part of the weekend at Mar-a-Lago resort on February 17, 2017 in West Palm Beach, Florida. Joe Raedle/Getty Images

We spent a lot of time this week talking about an existential question for people watching Donald Trump’s young presidency: What’s a crisis and what isn’t? We also spend a lot of time trying to parse what’s typical for a new administration and what, like Trump himself, is unprecedented.

Those questions were still rattling around in our heads when we got this question from Margot S.:

[What are the] limits on Presidential spending if Trump wants another home away from “home” (the White House), or another, or another — do we just keep paying for the services needed at each residence?

Trump has spent about half his weekends since the Inauguration at Mar-a-Lago, his residence and exclusive club in Palm Beach, Florida. Those trips include some diplomacy (at times in full view of guests), other meetings and quite a bit of golf. Trump’s also made a few stray trips to his other properties, including a night at his new hotel just down the street from the White House and a “mini cabinet meeting” at the Trump National Golf Club outside D.C. Meanwhile, Trump’s wife, Melania, is still living at Trump Tower in New York City with their young son, Barron.

Trump has started referring to Mar-a-Lago the “Southern White House” instead of the “Winter White House,” indicating his trips there will continue. With the White House’s “budget blueprint” out, those frequent, expensive trips have raised eyebrows.

The truth is presidential travel is an expensive necessity, though Trump’s trips seem to be more expensive than others. One of the only checks on them has traditionally been bad PR, and that’s rarely stopped Trump.

But are his travel habits really all that unusual?

“We’ve allowed [presidents] generally to act in the way that they think helps them make the best decisions,” said Bowdoin College professor Andrew Rudalevige, who studies presidential authority. “Some presidents have done that pretty much entirely in the White House, others at Camp David. You can think back to presidents [Ronald] Reagan or [George W.] Bush spent a lot of time at their respective ranches in California and in Texas.”

The president is never really on vacation, which is part of what makes these trips so expensive. Author Scott Farris summed up why in the Washington Post a couple years ago:

They don’t so much leave the White House as they take a miniature version of it with them wherever they go. Some 200 people accompany a president on vacation — including White House aides, Secret Service agents, military advisers, and experts in communications and transportation — to ensure that, while on vacation, the president can do nearly everything he could accomplish in Washington.

While presidents cover their own lodging, food and other expenses while they’re on vacation — presumably this isn’t an issue when Trump owns the place — but taxpayers foot the bill for the rest of that miniature White House. Some of those costs are part of the executive branch’s budget anyway; the president’s staff still makes a salary whether they’re in Washington or Florida. Other additional costs add up fast: Politico estimated a weekend in Mar-a-Lago costs $3 million. Much of that money goes into Air Force One, which costs about $206,000 an hour, and other aircraft moving the presidential apparatus. Camp David, the traditional presidential retreat just a helicopter ride away from the White House, would be a lot cheaper, but Trump seems to have little interest in using it.

So the expense report for a working vacation or a family home is always complicated. But a big thing driving costs for the real estate mogul is location, location location. Trump’s trips to Mar-a-Lago all but shut down the small local airport, and overtime for local law enforcement costs around $60,000 a day. Even though Palm Beach County is enjoying more tourism thanks to Trump’s frequent visits, hosting the president every other weekend threatens to cause a budget crisis. Protecting Melania and Barron Trump is even more expensive.

“It is much simpler and cheaper to protect a president staying at a remote ranch rather than in a high-rise in the middle [of] one of the world’s most populous and hectic cities,” Farris said in an email interview.

Indeed, the Secret Service requested an additional $60 million in funding for next year, the Washington Post reported. Nearly half of that money is for protecting Trump’s family in New York City and around the world as his other sons run his real estate empire. The request was reportedly rejected by the White House Office of Management and Budget.

So Trump’s trips are expensive, though maybe not as unusual as his critics might think. But Margot’s question was about limits — are there any checks on this administration’s spending on the Trump lifestyle? The short answer is no.

Congress approves the budget, of course, but it’s unlikely the battles lawmakers pick will be over Mar-a-Lago or Trump Tower.

“I think the basic attitude has been, ‘Well, it costs what it costs,'” Rudalevige said. “The president sort of doesn’t complain about how much Congress spends on its own staff or its own needs, and Congress approves what the president asks for with regards to executive office spending.”

The only other check on presidential spending has traditionally been the public. Lavish vacations and other trips, even working ones, aren’t a good look for a sitting president.

“[President Bill] Clinton did polls on where to vacation and picked Grand Teton and Yellowstone parks, but when the presidential entourage ruined a lot of people’s vacations there, he realized a secluded place like Martha’s Vineyard causes less bad press. Obama concluded the same,” Farris said via email. “Trump is getting grief, in part, because he is racking up these expenses while proposing a budget that cuts a lot of small cost programs.”

But Trump “does not seem to operate using the normal cycles of political shame,” Rudalevige notes. He’s long held that all press is good press, and a lavish lifestyle is integral to his brand.

There’s one other big factor here. Other presidents kicked off to their private homes; Trump is staying at resorts he owns. It’s too early to tell, but that could put a constitutional check on the weekends in Mar-a-Lago. Remember the Emoluments clause?

“One of the things that animates this discussion is: Is he profiting monetarily from the use of his property? In the way that he’s promoting it, or raising membership fees and so on. And I think that is potentially troubling. Whether you’re monetizing your vacations — that’s sort of an interesting twist that would, again, be different from other presidents.”

Subscribe to “Make Me Smart with Kai and Molly” on iTunes or your favorite podcast app.