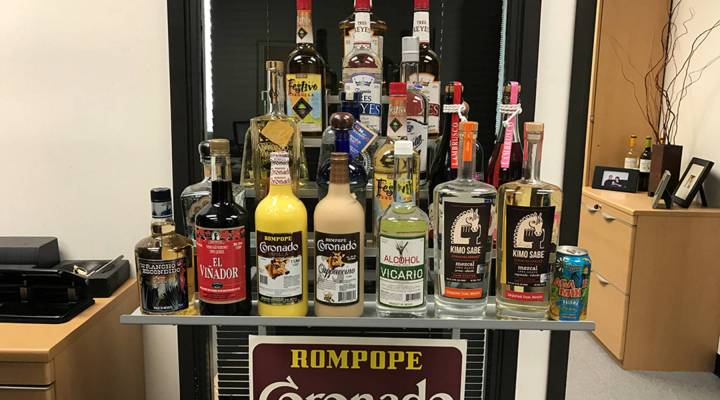 COPY
Virtually all the tequila in the United States comes from Mexico. Plans to renegotiate or withdraw from NAFTA are affecting business plans for tequila makers. Daisy Palacios/Marketplace
NAFTA Explained

Virtually all the tequila in the United States comes from Mexico. Plans to renegotiate or withdraw from NAFTA are affecting business plans for tequila makers. Daisy Palacios/Marketplace
Listen Now

You go out for dinner, you decide to have a margarita, then you’re almost certainly partaking of a Mexican import. Virtually all the tequila in this country comes from Mexico, which means that if the president follows through on his promise to renegotiate or scrap NAFTA, happy hour might be a little different.

Kai Ryssdal: First of all, tell me how much NAFTA means to you as a company.

Javier Martinez: A lot. Because it provided a state of mind. First of all, before anything legal or regulation or anything like that, you feel like this is where the market will be strong. You need to go do business with the U.S. because the conditions are provided right there. It would be stupid not to take advantage and go to Central America or South America instead. I mean, we are neighbors. So that means a lot because that sets the frame of mind.

Ryssdal: There is a clause or a section of NAFTA that deals with tequila and spirits and all of that, right?

Ryssdal: And that’s what let you get into this business. I mean, you come in around ’97, a couple of years after NAFTA. But it’s that clause that lets you get going.

Martinez: In part, yes. Tequila was growing anyway in the United States, but that kind of facilitated the avenue into the market. You know, Annex 313 says that tequila for the U.S. is whatever Mexico says that tequila is. So that lowered the regulation. You just tell the U.S., “I’m going to bring this tequila. Here’s my label,” and the approval is in 10 days or something like that. Very easy. So really, NAFTA facilitated the whole procedure. So, regulation? You know what Mr. Trump is saying about regulation? Well, NAFTA is going to kill that.

Ryssdal: Well, talk to me then. Because the president has said he wants to renegotiate or get rid of NAFTA. He wants to put taxes on products coming into this country. What’s that going to do to Martinez?

Martinez: Well, first of all, you know, the uncertainty that he has introduced into the business — before any legal decision is affecting my business, my mind has already affected it.

Martinez: I’m feeling it. On top of my business, I am also currently the president of an association of Mexican entrepreneurs. It’s Mexican business owners here in Southern California who have businesses. And all of us, we’re worried. Because we put together whole business plans. Like, in my case, I was going to bring wines from Mexico. The logic was, they accepted our beer, they accepted our tequila, wine should be the next thing. Right?

Martinez: Absolutely. But then, you know, we have the plans we put together, and I said, “Shall we do it, or should we wait until it is more clear?” You know, is it going to be a tariff of 20 percent or what is it going to be?

Ryssdal: Yeah, but waiting for you, a guy who runs a business, time is money.

Martinez: Exactly. But you know, you have to make the decision. You have to run the risk and continue as if nothing is going to happen, or you’ll slow down.

Ryssdal: So what are you going to do?

Ryssdal: When you talk to your family members still in Mexico, and your business partners I imagine, what do they see from the other side of the border? What do they say?

Martinez: Well, what we hear in the press, they say “What’s happening? Why is the U.S. going nuts?” You know, the uncertainty. The question that everyone is asking is “Are they serious or they are joking?” Because if they are serious, look at the data. They are shooting themselves in the foot with about 5 to 6 million jobs in the U.S. dependent on NAFTA. Eighty percent of the corn [Mexico] is buying from the U.S., and so on and so forth. Yeah, of course the U.S. have more leverage versus Mexico, but it’s going to affect them too.

Ryssdal: What will four years of a Trump administration, or maybe eight, mean for this company?

Martinez: Well, first of all, uncertainty. Once there’s more clarity in what is going to happen with NAFTA, then, increase in the prices. Increase in the prices will mean less demand, obviously. And then rethinking the whole business model really, based on what is the framework for us to operate.

Ryssdal: The Mexican government has not been strong, shall we say, in standing up to Mr. Trump. Do you look to them, to President Pena Nieto, for support?

Martinez: Well, I think the sense is that in the business community, we feel that the government has not been up to the challenge. We need to be stronger and firmer. And they have taken this approach of always being cautious and “We don’t want to upset anyone; we want to negotiate.” But you’re not playing with the same rules that Washington is playing, and you got to understand that. So, that’s our only complaint.

Ryssdal: Mr. Martinez, thanks very much for talking to me.