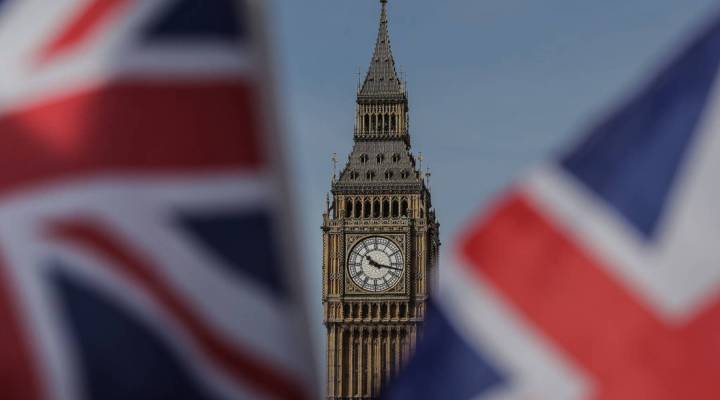 COPY
When the United Kingdom exits the European Union, large companies will first need to work out their relationships with the single market, says Kamal Ahmed of the BBC. DANIEL LEAL-OLIVAS/AFP/Getty Images
Brexit

When the United Kingdom exits the European Union, large companies will first need to work out their relationships with the single market, says Kamal Ahmed of the BBC. DANIEL LEAL-OLIVAS/AFP/Getty Images
Listen Now

The United Kingdom’s Parliament has backed a law that will grant Prime Minister Theresa May the ability to leave the European Union.

After the Queen signs it into law, May can trigger Article 50, officially beginning the process.

So what’s in store for Britain? The BBC’s Kamal Ahmed joined Marketplace’s Mark Garrison to discuss what a weaker pound means for the U.K.’s economy and the future of the country’s relationship with the United States. Below is a transcript of their interview:

Mark Garrison: What will be the key issues that the business community is going to be most concerned about as Britain negotiates this exit from the European Union?

Kamal Ahmed: The first thing for most large businesses will be the relationship with what’s called “the single market.” Will there be any hindrances to our exports into the European Union, which make up about 44 percent of the U.K.’s exports, that can come via tariffs? And also, what are called “non-tariff barriers” — so that’s rules and regulations that change and that particularly affects the city of London, for example.

Garrison: So what happens if the U.K. and the EU cannot reach a trade deal?

Ahmed: Well, Theresa May has said no deal is better than a bad deal. And I think if you are at your most pessimistic, the suggestion would be that the EU-27 would want to punish the U.K. for leaving or voting to leave the European Union. The more optimistic view is that not only does Britain need access to the European single market, but Europe needs Britain. But if it was a bad deal, of course, we would fall back ultimately onto what are called WTO, World Trade Organization, rules. That would mean some tariffs for some of our big export markets in particular.

Garrison: We have seen the pound weaken since the Brexit vote. This, as we know, can be good for large firms that export, not so great for companies that import goods. Overall, how is the weaker pound playing out for Britain’s economy?

Ahmed: Well, there’s been some initial data which suggest that exports have increased. The other side to that debate is the inflation effect. The key data point for this country is the relation between inflation and income increases. Of course, if that inflation figure hits the incomes figure, then people’s real incomes start falling. If that happens, then the worry is that the U.K. economic growth would slow.

Garrison: Prime Minister May was the first foreign leader to visit President Donald Trump as president. How might Brexit change the economic and trade ties between the U.S. and the U.K.?

Ahmed: America is our largest single nation export destination. Speaking to business people here, they are looking at where are there now opportunities. And that is not just China; that is not the old commonwealth countries in terms of size. That is America. And I think a lot of companies I’ve spoken to will redouble their efforts to get good trade with America. There is political goodwill on both sides to show the world that this new political and economic order can do deals.