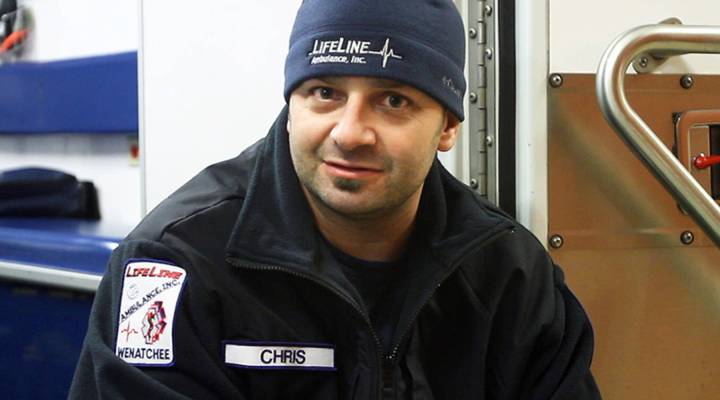 COPY
Chris Morales, 40, was hired as an EMT at LifeLine Ambulance Inc. in Wenatchee, Washington, after being laid off from Alcoa's aluminum smelter in 2016. The work pays less but is more fulfilling. Courtesty of Michelle Naranjo/Wenatchee World

Chris Morales, 40, was hired as an EMT at LifeLine Ambulance Inc. in Wenatchee, Washington, after being laid off from Alcoa's aluminum smelter in 2016. The work pays less but is more fulfilling. Courtesty of Michelle Naranjo/Wenatchee World
Listen Now

Well-paid factory jobs producing primary metals such as steel and aluminum have been disappearing in the past several decades in the U.S.

In early 2016, Alcoa shut down its aluminum smelter in Wenatchee, Washington, and laid off nearly all 420 workers at the 65-year-old facility, sited next to a hydroelectric plant on the Columbia River. Alcoa also announced it would shut down its smelter in Massena, New York, but reversed that decision after New York state provided Alcoa with financial incentives and cheap power contracts worth up to $70 million. That agreement preserved 600 jobs at the Massena smelter through March 2019. Alcoa cited low commodity prices and China’s flooding of the global market with cheap aluminum as reasons for its downsizing.

Since the announcements, workers and businesses dependent on Alcoa’s operations have been adjusting to the changing economic landscape. In Wenatchee, workers were eligible for government-supported job retraining because of Alcoa’s mass layoff and plant closure. One group of laid-off workers is now enrolled in an auto mechanics program at the local community college.

Chris Morales, 40, pursued a different path. He completed EMT training while working at Alcoa in Wenatchee. Following the plant closure last year, he landed a job at a local ambulance company.

Interviewed in the back of an ambulance between emergency calls late one night during a snowstorm, he said he missed the pay at Alcoa — he earned $60,000 to $70,000 per year with overtime. But he said he didn’t miss the harsh working conditions in the smelter.

“I used to have a picture of a temperature I took. The floor was roughly 250 degrees, and we were standing on that floor,” he said. Asked what he missed most about working at Alcoa, he said: “The camaraderie — you really had to rely on your crew members for survival.”

Morales said working in a team has always been appealing to him.

“I would rather be here,” he said of his current job as an ambulance driver. “I need to go home and know that I did some good. Personally, I like to help people.”

But Morales said the financial transition has been difficult. He and his wife are supporting three elementary school-age children.

“This job pays about half what Alcoa did,” he said. “We have to make it on this. My wife has a good job working for the state. She’s got her master’s degree, she’s kind of the brains of the operation.”

Across the country in Massena, former Alcoa worker Jason Hendricks has also left work in the smelter behind.

Hendricks is 34, with two children. He worked at Alcoa for seven years while also running a small web-design business on the side. In late 2015, the company announced it was curtailing operations in Massena and laying off nearly 500 workers. After state leaders came up with a $70 million package of financial incentives to keep Alcoa’s smelter open until at least March 2019, Hendricks decided to take a severance package and leave Alcoa to run his business, H3 Designs, full-time.

“I decided that this is my passion, this is where I want to be, versus the manufacturing environment,” said Hendricks, who attended college briefly in his early 20s and taught himself web design. “My skill sets were more business- and goal-driven.”

Hendricks said he didn’t see a future for himself in factory work, even with the Alcoa smelter expected to stay open until at least March 2019. He also said that turning his back on a steady paycheck and good union benefits at Alcoa wasn’t easy, “especially when you have two young children that depend on that income. But you have to believe in yourself.”

Hendricks shares a storefront with a studio photographer on Main Street in downtown Massena. Their building is flanked by boarded-up commercial businesses. After more than a decade of plant closures and mass layoffs in aluminum and auto production, the town is depressed, with population falling and many buildings in disrepair.

But Hendricks, who serves as vice president of the Massena Chamber of Commerce, said his business is thriving. And he remains optimistic that young entrepreneurs like himself can bring prosperity back to the area.