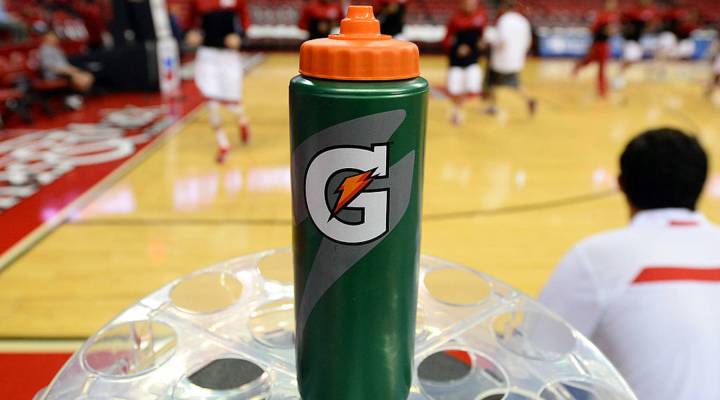 The NBA Developmental League won’t be called the D-League next season. It’s going to be the “G” league, because Gatorade bought the naming rights. The NBA hopes Gatorade will throw its brand behind marketing and that more people will watch.

The NBA’s Developmental League is kind of like the minor leagues in Major League Baseball. For a bit of context, the New York Knicks play at Madison Square Garden. The capacity there is more than 20,000. The Westchester Knicks, one of the 22 D-League franchises, play at the Westchester County Center. The capacity there: just over 2,000. Jim Andrews, senior vice president at the marketing firm IEG, said there is one concrete benefit for the NBA.

“They get a partner in Gatorade that is very good at promotion and advertising,” he said. “And that’s something that the D-League really could use.”

For its part, Gatorade gets a title sponsorship and it can use the developmental league as a research and development playground. Jeff Kearney, global head of sports marketing at Gatorade, said the company is excited about the sort of research it can test on these professional athletes.

“We’re going to have an embedded presence in this league to play some offense and be proactive, and incubate products and equipment,” he said.

Gatorade and the NBA will be able to develop original marketing content, like videos of players testing the equipment. Ken Shropshire, a sports business professor at the Wharton School, said the NBA can use the partnership as a testing ground, as well.

“It’ll be able to see how the public reacts to it and to see if the money is worth it,” he said. “To see if there’s a deliverable that comes by adding a corporate name to the name of the league.”

But there has to be a point of branding exhaustion. It seems like everything nowadays is brought to you by something or somebody, and it’s tough for marketers to keep up. Folks trying to sell TV ads will be the first to say that if viewers can fast-forward through them, they’re going to do it. Seem like the question is: do we really need something like the Coca-Cola NBA Finals?

“You just can’t do it,” said Ben Sturner, the founder of Leverage Agency, a sports marketing firm.

“You can’t take over something that hasn’t been taken over for a long time like the NBA Finals where you have six or seven or eight corporate partners and they’re all paying seven figures and it’s going to be hard to differentiate,” he said.

The NBA is trying different marketing and branding tactics beyond this partnership with Gatorade. Next season, a few teams will have advertisements on the upper-left corner of player’s jerseys. It’ll be less explicit than European soccer, but it’s still more branding.

“I am not concerned about the over saturation,” he said. “And I think though some purists may say that they are, let’s see how they feel two or three years from now. I doubt they’ll raise a fuss then. The sports consumer will adapt.”

Neither the NBA nor Gatorade would comment how they’re going to know if the partnership is paying off. And there’s no guarantee it will.

“There have been some examples of sports governing bodies and leagues that have tried this and who have turned around and decided not to do it,” said  Jim Andrews at IEG.

Women’s professional tennis in the U.S. and Premier League soccer in the U.K. had title sponsors for years and, for one reason or another, the parties decided to cut ties. Andrews said this NBA and Gatorade deal is different. It’s easier to try something like this out in the developmental league where there are relatively few sponsors and fewer potential conflicts.

Can you imagine watching a Gatorade NBA game with players on the LA Lakers sporting Powerade ads on their jerseys? It might not be too far off.