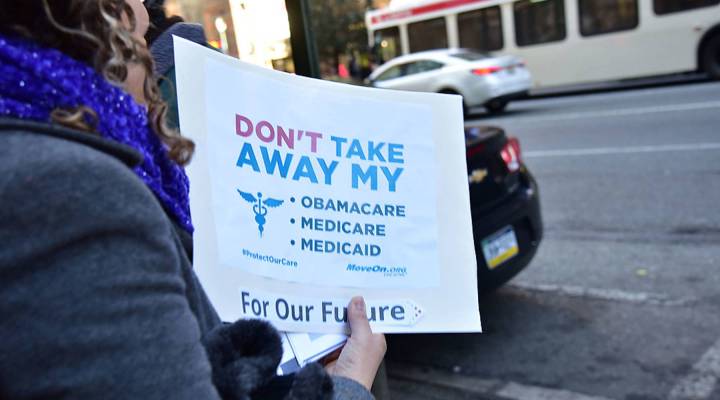 COPY
A constituent demonstrates during a rally in support of the Affordable Care Act. Lisa Lake/Getty Images for Moveon.org

A constituent demonstrates during a rally in support of the Affordable Care Act. Lisa Lake/Getty Images for Moveon.org
Listen Now

Concerns about the Affordable Care Act or ACA are weighing on many Americans’ minds, including those in Wisconsin.

Clint Evenson, a divorced mechanic in Boyceville, Wisconsin, voted for Trump partly out of dissatisfaction with the ACA and the penalty it forced him to pay for a lapse in his four kids’ health coverage last year.

“I had a few months where my kids didn’t have health insurance because they got dropped off their other one, and I couldn’t get them on my work one until open enrollment in November,” he said. “So I ended up paying a $1,600 penalty.”

The latest House Republican plan drops the health insurance mandate. Evenson would love to see it go. The proposal would also expand health savings accounts, which could help people pay for high-deductible plans.

But Evenson is no fan of those plans, either. His family is on one.

Tammy Deutsch of Menomonie would like to see ACA subsidies go away. Under current policy, people below a certain income level may qualify for a subsidy to offset the cost of private insurance.

Deutsch said she could have gotten such a subsidy when she retired early from her job as a truck driver, but that option offended her sensibilities.

“I never asked for that. That’s the fiscal conservative coming out,” she said. “I don’t think that you should have to pay for my decision to retire at 56.”

Deutsch said she’s going without coverage and will pay the penalty for doing so. But if her health fails, someone else may still end up paying.

The House GOP proposal would instead offer tax credits tied to earnings and age, which could, in many cases, be lower than the current Affordable Care Act subsidies.

Critics say the House GOP plan would result in far fewer people having insurance. That would be bad news for Dave Johnson of Fall Creek Wisconsin.

“I work at a Catholic-based hospital system, and we take care of a lot of patients that are underinsured or not insured at all,” he said.

Johnson said he’s worried his employer’s exposure to uninsured patients will rise, pushing its costs up, and forcing the hospital system to lay off workers.