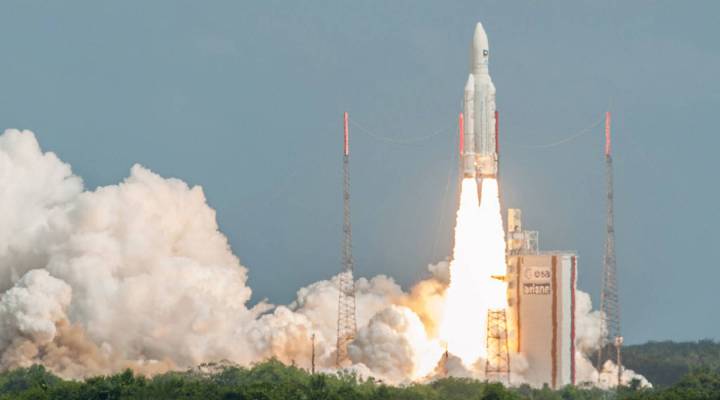 During his address to Congress, President Donald Trump said that “American footprints on distant worlds are not too big a dream.” While the details about that dream are unclear, what is clear is that last month Congress approved an authorization bill for NASA. That bill allows NASA $19.4 billion in spending money for 2017, and NASA Acting Administrator Robert Lightfoot has already instructed his team to consider what it would take to send people to Mars. So how likely is it that we’ll see a televised Mars landing? Marketplace host Kai Ryssdal spoke with science journalist and FiveThirtyEight contributor Rebecca Boyle, who’s been following the story. Below is an edited transcript of their interview.

Kai Ryssdal: We should point out here at the beginning that the thing that that made NASA work and, honestly, was key to the success of the space program in the ’60s was continuity over presidential administrations and NASA administrators over time. And just in the past, I don’t know, probably 10, 12 years, we’ve had four or five different plans for space exploration.

Rebecca Boyle: Yeah, that’s been one of the issues with the Mars program specifically. There’s not been a consistent long-range plan to get people to Mars from NASA’s perspective. You know, there have been a few presidents who have pitched Mars programs in the past, and they’ve sort of faded with the next administration largely because of funding being, you know, a huge requirement. No one wants to spend billions of dollars on space exploration when there’s not really a clear case for doing so. So that lack of consistency has been one of the reasons why we’ve never really had a firm deadline, a major clear budget and a plan to get people to Mars.

Ryssdal: The thing about space, though, is that it costs a zillion dollars. And when you’ve got so much that needs to be done here on Earth — infrastructure, and figuring out health care, and education, I mean you name it, the roadblock always is “Why deal with going to other places when we’ve got so much to do here at home?”

Boyle: Yeah, that’s kind of the perennial argument against space exploration as a whole. And a country has to set priorities, and it’s very fair to say that we have plenty of other problems to address here on Earth before spending our money on Mars, or back to the moon, or where else we want to go. But you know, the other argument is that these programs create a lot of jobs. They inspire a lot of people to study subjects they might otherwise not. It’s hard to argue for Mars in some ways, but that’s sort of beside the point. I think a lot of people who want to go there don’t feel that we need to have a motivation to go. Let’s do it. We can. We should.

Ryssdal: Speaking of people who want to go, Elon Musk and this entire idea of American capitalism in the private sector leading the way in space now.

Boyle: Yeah, that’s going to be very interesting going forward. I mean, I think the new space race is actually going to be between private companies themselves and between private companies and government agencies. Looking at going to Mars and back to the moon suddenly as is now an exciting prospect too. It may be easier to make a business case for going back to the moon. There are resources there that we can mine, including helium 3, which is used in nuclear reactors. So there may be money to make on the moon. The case for Mars is not as clear, but you know, again, that Elon Musk talks about this, and he isn’t looking to necessarily make money on it. It’s that we can do this, and he takes a much longer view, and he says that it’s important for long-term species survival, planetary protection, you know, ensuring the light of consciousness moves forward on Earth. And that’s kind of hard to put a price tag on.

Ryssdal: He does like to think big thoughts. So would you go, by the way, he said the other day he’s going to send two civilians on a trip around the moon. Would you go?

Boyle: Only if you told me that it was this sort of pie in the sky idea, like, “Oh, sure, yes, I’ll be a journalist on the moon. I’ll go to the moon.” But it’s actually not that far out of the realm of possibility. And so when it gets a little bit more realistic, it’s like, no. I don’t think so.