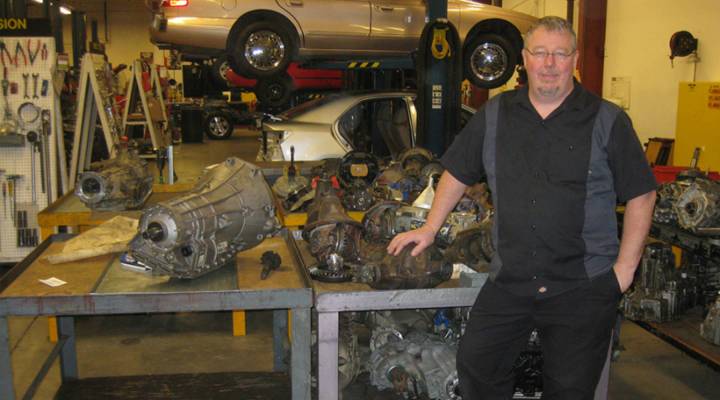 In early 2016, Pittsburgh-based Alcoa shut down one of its last remaining U.S. aluminum smelters. The plant was in Wenatchee, Washington, a small city on the Columbia River east of the Cascades Mountains. More than 400 workers — making an average base-pay of $23.50 an hour, with union health and pension benefits and lots of opportunities to earn overtime — were laid off.

Some of the laid-off Alcoa workers have enrolled in a retraining program in auto mechanics at Wenatchee Valley College. They’re eligible for government-supported job training because of the mass-layoff and plant closure.

Many report that they’re still reeling from the financial setback of lost income and benefits, and that the shutdown of their workplace has caused social and psychological disruption in their lives.

But for the most part, they don’t lament the loss of opportunity for their children to work at Alcoa’s smelter.

Josh Musgrove, 38, said he misses the camaraderie at Alcoa most — working hard as a team, in heat and danger.

“It’s almost like a family,” he said. “Everybody else looks after each other. And in other jobs nowadays, you’re on your own.”

But Musgrove said that even though generations of men in his family have proudly made a living making aluminum at Alcoa, “I wouldn’t want my kids working there — mainly because of the work itself. I wouldn’t want them to go through that.”

“They tried to make it somewhat ergonomical, but especially for the guys on the floor setting carbon, it’s shift work — totally hard on the body,” he said.

Josh Busjahn, 26, said working at the smelter made him proud.

“It was a unique line of work — dangerous, somewhat of a thrill,” Busjahn said. “I’ve got a son that likes mighty machines, and going to work and actually getting to drive one and come home and tell him that’s what dad was doing — it impressed my kids.”

Asked how he’d career-counsel his son, he said: “Don’t get into an industry that China can wipe you out of.”

Alcoa cited low global commodity prices and Chinese overproduction of cheap aluminum as reasons for reducing aluminum-smelting capacity in the U.S. and curtailing several facilities around the country. Alcoa has thus far not indicated any plans to reopen the shuttered Wenatchee smelter. The company said in a statement emailed to Marketplace:  “We continually review our curtailed assets globally based on market conditions and a variety of other economic factors.”

The Alcoa plant operated in Wenatchee from the early 1950s, benefiting from cheap power produced at two nearby hydroelectric plants on the Columbia River. The industrial, manual-labor jobs that Alcoa provided supported generations of working-class men and women in this rural area. They could make enough money to raise a family on one income, without needing more than a high-school education.

At the Wenatchee Aluminum Trades Council, union president Kelley Woodard, 57, said he left college after a couple years in the early 1980s to work in the Alcoa smelter.

“At that time my aspiration was to be a teacher,” said Woodard. “But the people working there were making about twice as much as teachers, so I thought I could do that. The money was good and I don’t regret it. But I never did want my kids to go into this.”

Woodard put his two sons through college working at Alcoa. One plans to be a doctor. The other earned college spending money working summers in the Alcoa smelter.

“That’s when he really got interested in the union movement,” said Woodard. His son is now a union organizer for AFSCME in Portland, Oregon. “So, I’m pretty proud of that.”