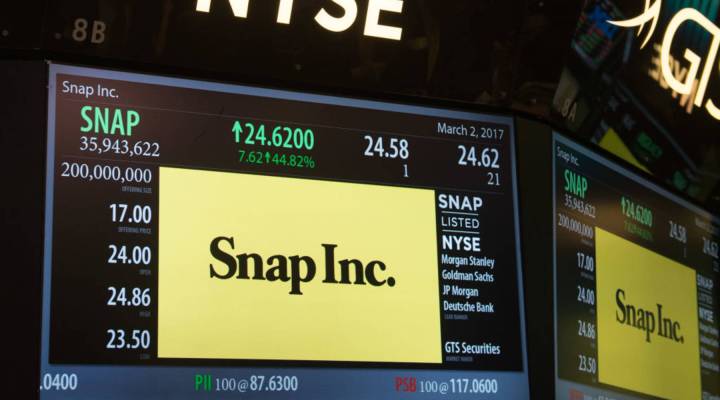 Back in 2013, Facebook offered Evan Spiegel $3 billion — in cash — for his fledgling disappearing message app, Snapchat.

Spiegel turned it down, leaving many people to think he needed to have his head examined. Spiegel later told Forbes magazine: “There are very few people in the world who get to build a business like this. I think trading that for some short-term gain isn’t very interesting.”

Things are very interesting now.  Snap, the parent company of Snapchat, made its initial public offering today, and the stock price soared more than 40 percent over the opening price, making the company worth more than $30 billion. And making Spiegel and his partner, Bobby Murphy, billionaires before the age of 30.

Snap’s IPO is also going to be a life changer for many of the company’s young employees, who have become paper millionaires overnight.

And there’s a conga line of money managers, luxury providers and real estate agents only too eager to try and help them manage and spend their money.

Todd Morgan, chairman of Bel Air Investment Advisor in Los Angeles, said his firm is already in talks with some Snap employees. He said because many new tech millionaires come from the start-up culture, the first thing they want to do with their new money is risk it.

“They might sprinkle it around in 10 different deals, maybe put $50,000 in a deal, hoping that one of them will be the next Facebook,” explained Morgan, who helps clients manage their wealth.

Other employees may go straight to buying a new home.

A mile from Snap’s office in Venice, real estate broker Michael Grady of The Agency said he’s already reached out to several of his tech contacts to try and put him in touch with potential homebuyers. One real estate agency, Halton Pardee + Partners, is offering to cut its commissions for Snap employees.

“They are looking for bigger lots,” Grady said. “They like the whole compound feel.” It’s a feel that might be hard to come by in Venice, which is a beach town and where houses are practically on top of each other.

With new potential homebuyers, the value of real estate in Venice will likely go up, he added.

“Because there’s more purchasing power, more people out there looking and putting capital into real estate, that raises the price,” he explained.

While there is likely to be a housing bump, Grady added that brokers shouldn’t necessarily bank on a buying frenzy.

For now, a lot of Snap millionaires are only millionaires on paper. Plus, they’re just beginning to wrap their minds around their money, which can be more difficult than it seems, said psychologist Stephen Goldbart, co-founder of Money, Meaning & Choices Institute.

He said after a windfall, there’s the honeymoon phase. Then, comes the identity crisis. During that stage, people who have quickly acquired wealth question their role in society and how people perceive them, including their friends.

Their friends may ask “Now, who are you? Give me some. What can you do for me?” Goldbart said.

To help its employees, Snap is offering legal and financial services. Meanwhile, some employees have already gotten a taste of what it’s like to be targeted for their money.

All week, demonstrators have been outside Snap’s offices in Venice, protesting the company’s growing footprint in what’s known as Silicon Beach. The area has seen a huge influx of tech money over the last few years.

Protesters said they’re worried about even more millionaires flowing in to the Venice area and pricing the less-than-wealthy out.